An Encounter of Saints: Padre Pio and Karol Wojtyla 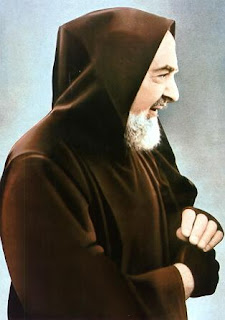 The following comes from The Path Less Taken:

From a fascinating article by Frank M. Rega. 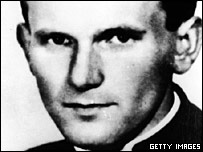 Shortly after World War II was over, a young Polish priest who was studying in Rome, Fr. Karol Wojtyla, visited Padre Pio in San Giovanni Rotondo. This encounter took place around 1947 or 1948. At that time in post-war Italy, it was possible to have access to Padre Pio, since travel was difficult and great crowds were not besieging the Friary. The young priest spent almost a week in San Giovanni Rotondo during his visit, and was able to attend Padre Pio’s Mass and make his confession to the saint. Apparently, this was not just a casual encounter, and the two spoke together at length during Fr. Wojtyla’s stay. Their conversations gave rise to rumors in later years, after the Polish prelate had been elevated to the Papacy, that Padre Pio had told him he would become Pope. The story persists to the present day, even though on two or three occasions "Papa Wojtyla" denied it.
Recently, new information about this visit has come to light, according to a new book in Italian published by Padre Pio's Friary, Il Papa e Il Frate, written by Stefano Campanella (1).  As reported in this book, the future Pope and future Saint had a very interesting conversation.  During this exchange, Fr. Wojtyla asked Padre Pio which of his wounds caused the greatest suffering. From this kind of personal question, we can see that they must have already talked together for some time and had become at ease with each other. The priest expected Padre Pio to say it was his chest wound, but instead the Padre replied, "It is my shoulder wound, which no one knows about and has never been cured or treated." This is extremely significant, not only because it reveals that Padre Pio bore this wound, but because, as far as is known, the future pope is the only one to whom Padre Pio ever revealed existence of this secret wound.
Centuries earlier, Our Lord himself had revealed to St. Bernard of Clairvaux in a vision, that his shoulder wound from carrying the heavy wooden cross caused him his greatest suffering, and that the cross tore into his flesh right up to the shoulder bone.
Posted by Padre Steve at 4:00 PM

Thank you, Padre Steve for linking to my blog. I love the regal blue of your blog and the spirit of St John Bosco palpable throughout the posts. Readers might also like a blog I did on why Padre Pio initially refused a woman absolution on the grounds that she lacked contrition; but some time later he granted her absolution. There is resonances here with the dreams of St John Bosco where he had dreams telling him that the boys in his care were not making good confessions, and how he used the knowledge gained in the dream sequences to become a better confessor. http://thepathlesstaken7.blogspot.co.uk/2016/11/the-precise-reason-padre-pio-refused.html