Mary, Help of Christians, pray for us! 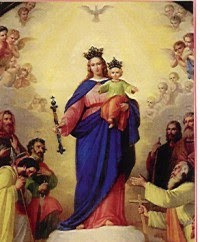 During this changing and confusing time in the history of the nation and all around the world it is time for us to recommit ourselves to Our Blessed Mother. Don Bosco was clear that "The help of God and of Mary will not fail you...I recommend devotion
to Mary Help of Christians and frequent Holy Communion..."

She is with us in every trial and has always protected the Church. Here is a bit of history on the devotion. The following comes from Fr. George Rutler:

I need not remind the Navy personnel in our parish that the Battle of Lepanto in 1571 ranks as one of the most important sea engagements of history. It may even top the list which includes the battles of Salamis in 480 B.C., Trafalgar in 1805, Tsushima in 1905, Jutland in 1916 and Midway in 1942. Years before he wrote Don Quixote, Cervantes, who was wounded in the battle, called it the greatest scene of centuries. A quiet Dominican friar, Pope Pius V, formed a Christian fleet with the navies of the Papal States, Venice, Spain, Genoa, Savoy and Malta under the command of Don Juan of Austria, who was called “the last Knight of Europe” in Chesterton’s poem “Lepanto.” Don Juan, the half-brother of the King of Spain, was an illegitimate son of the Holy Roman Emperor, Charles V, by a popular singer of the day named Barbara Blomberg.

Assisting admirals included Agostino Barbarigo of Venice, who would be killed by arrows, and Giovanni Andrea Doria of Genoa. With great skill, the assembled fleet of 212 ships rowed and sailed from Messina in Sicily to the Gulf of Patras off Cyprus. The Muslim fleet of the Ottoman Turks under the command of Ali Pasha had 230 galleys and 56 smaller galliots. The combined forces numbered 150,000. With tremendous engineering skill, the fleets engaged each other in torrid combat all day long on October 7. Before the battle, Don Juan sailed by all his ships under a banner of Our Lady while praying the Rosary. Remarkably, Don Juan was only 24.

That night, far away in Rome, Pius V opened a window and cried out with tears of joy as he saw in the sky a vision of the battle exactly as it happened: “Thank God for the victory which He has just given the Christian army!” October 7 became the Feast of Our Lady of Victory. Two years later Pope Gregory XIII changed the name to Our Lady of the Rosary, and the Blessed Virgin received a new title, “Help of Christians.”

This is not just an interesting chapter in war history. The Battle of Lepanto was fought to save Christian civilization. Had it failed, we would not be living in a recognizable world. Not everyone at the time recognized its importance. King Charles IX of France did not participate, nor did King Louis XIV help when the Ottoman forces sought revenge at Vienna in 1683. Austria, and indeed Europe, was saved then by the Polish King Jan Sobieski who arrived just in time on September 11.

October is the month of the Rosary, poignantly so, as Europe is fast losing its Christian hope, not through military conquest, but through contraception, abortion and spiritual indifference. Our Lady will always secure victory, but only for those who do the will of her Son.
Posted by Padre Steve at 1:00 PM