Martin Sheen speaks about The Way of St. James 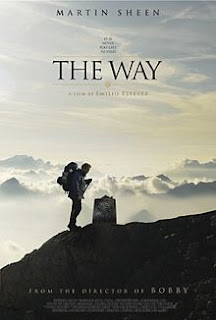 Actor Martin Sheen spoke in Washington, D.C. on Oct. 1 about his latest movie, which was filmed entirely along The Way of St. James, a European pilgrimage that leads to the city of Santiago de Compostela, Spain.

“If this is the last thing I ever do, I couldn’t be happier,” Sheen told his audience at the Basilica of the National Shrine of the Immaculate Conception in Washington, D.C.

The talk was part of a national tour to promote Sheen’s upcoming film, “The Way,” which opens Oct. 7.

Sheen stars in “The Way” alongside his son, Emilio Estevez, who directed the film.

“The Way” tells the story of an American doctor who receives news that his son has been killed in Europe while walking the Way of St. James. He decides to finish the pilgrimage in his son’s place.

“In the journey, he becomes himself,” Sheen said.

Sheen explained that as the pilgrimage progresses, the characters are forced to unload the things that burden them, both physically and spiritually.

“The real pilgrimage starts to take place on the interior,” he said.

“The pilgrims begin to open up their hearts,” he explained. “They begin to let go of anger and judgment and envy and all of the things that had kept them from being themselves.”

Sheen said that he has been amazed by “the number of young people that have been inspired by our film and are interested in making the pilgrimage.”

“The most rewarding part of the journey that we’re taking across America is really introducing pilgrimage to young people,” he said. “And the response has been so tremendous.”

Sheen also gave the audience a brief history of his own spiritual growth. He explained that he was born Ramón Estévez. When he moved to New York to pursue acting, he found himself faced with racial discrimination and decided that he needed a stage name.

He chose the last name “Sheen” after Archbishop Fulton J. Sheen, whom he described as having an “extraordinary presence” in his household when he was young.

“I grew up watching him,” Sheen said.

“I thought of him as this magnificent actor,” he explained, recalling the archbishop’s sharp sense of humor.

“He had this fire in his eyes that was a reflection of his passion.”

Sheen challenged his audience to evaluate their lives in terms of how they can serve those around them.

“We need a far more realistic understanding of who we are and why we’re here,” he said. “Whether we choose to acknowledge it or not, I believe we’re all responsible for each other.”

“There remains a very real and mysterious yearning deep within each and every human heart that compels us to reach outside of ourselves and serve others,” Sheen said.

“My fondest wish for all of you is that you will find something in your life worth fighting for.”
Posted by Padre Steve at 9:21 AM