Pope Benedict: ‘No war may be waged in God’s name’ 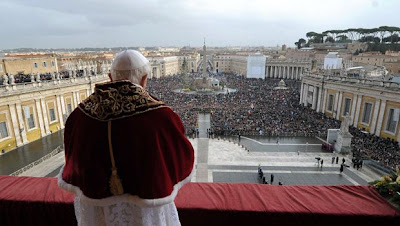 The following comes from the Catholic Culture site:

Father Federico Lombardi, director of the Holy See Press Office, has responded to criticism of Pope Benedict by the former grand mufti of Egypt.

Following a January 1 church bombing of a Coptic Orthodox church that left 21 dead, Ahmed al-Tayeb, current current Imam of al-Azhar Mosque, condemned the bombing and visited the head of the Coptic Orthodox Church to offer condolences. However, he also denounced Pope Benedict for calling upon civil authorities to protect Christians.

“I disagree with the Pope's view, and I ask why did the Pope not call for the protection of Muslims when they were subjected to killings in Iraq?” said al-Tayeb, who accused the Pontiff of “unacceptable interference in Egypt’s affairs.”

Time and again, the Pope has condemned violence against all people -- not only that which is perpetrated against Christians. We recall his recent discourse to the new Ambassador to the Holy See from Iraq, in which the Holy Father spoke of the innocent victims of violence, both Muslim and Christian.

Right now, we need the commitment of all those responsible for the safety of peoples and the fight against terrorism; we also need all those from all faiths, from every persuasion, who work for peace, to commit themselves to opposing a foul plan that evidently aims to divide, to arouse tension, hatred and conflict. The Pope’s invitation to Assisi for this coming October demonstrates his desire to repeat the message that no war may be waged in God’s name, but only peace. Between the 6th and the 7th of January, Coptic Christians celebrate Christmas. Let us unite ourselves to them in profound solidarity with their suffering and with prayers for the peace of all their communities.