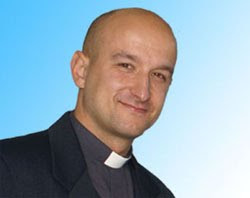 This is a sad time for Christians in the Middle East and North Africa.  The Bishop of Tunis feels that this violence against Christians might continue.  Please pray for the repose of the soul of our deceased Salesian confrere, Fr. Marek Rybinski, SDB.  The following comes from the CNA:

A Catholic bishop in Tunisia expressed fear of growing Islamic extremism in the area after a 34 year-old Polish missionary priest was found brutally killed on Feb. 18.

As local protests took place in the wake the murder, Archbishop Lahham Marun Elias of Tunis told Vatican Radio on Feb. 19 that he believes “an Islamic movement” directed against “all non-Muslims” is growing in influence within the country.

The body of Fr. Marek Marius Rybinski – a Polish Salesian missionary – was discovered last Friday in the parking lot of the local Salesian school, which is located in the Tunis suburb of Manouma. Although the Associated Press reported that his throat was slit, the Vatican-based Fides news agency stated that the priest was beheaded.

Over the weekend, hundreds participated in demonstrations including students from the school and their parents, who mourned the priest's untimely death and brought photographs, cards and flowers to the school in remembrance. On Feb. 18, Archbishop Lahham presided over a Mass in honor of Fr. Rybinski at the Cathedral of Tunis.

In an interview with Vatican Radio broadcast after the Mass, Archbishop Lahham recounted the incidents leading up to the murder. He reported that several weeks ago the local Salesian Fathers had received a threatening letter written in excellent French. The correspondence was addressed to “the Jews,” demanded money and threatened to kill everyone in the house if they failed to cooperate.

The archbishop said the letter was signed “with a Nazi swastika,” and explained “for the ordinary people” in the area, “if you are not a Muslim you are a Jew.” He recalled a recent demonstration in front of the local synagogue in which an Islamic group “told the Jews to leave because the army of Muhammad was on the way. ”

He went on to say that Fr. Rybinski, who served as a bursar for the community, departed from the mission house around noon on Feb. 17, leaving his car at the mission. The next day, “we found the computer in his room turned on. We therefore believe that someone called him with an excuse to get him to leave the house.”

“That person kidnapped Fr. Rybinski,” the archbishop said, “and then killed him the next day. His body was found in a warehouse at the school. The murderer, or murderers, are people who are familiar with the buildings, because the warehouse is hidden behind the school, and they also knew that Fr. Rybinski had the keys.”

“I saw his body at around 1:00 p.m. before the blood was coagulated, a fact confirmed by the coroner. So the murder took place a few hours before.”

Archbishop Lahham said that police have increased the number of guards in front of local churches in order to protect them. He added that the Tunisian government has assigned blame for the murder to a “group of extremist terrorists,” underscoring that until recently, Tunisia has traditionally been a country of peaceful co-existence between cultures and religions.