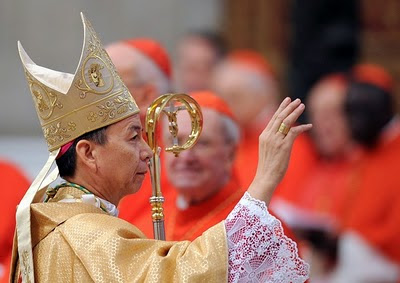 Rocco at Whispers has a great posting on our newest Salesian Archbishop! Archbishop Savio Hon visited our community last Fall for a day of recollection with us and the Salesian Sisters! You are in our thoughts and prayers Archbishop! Here is the story from Whispers:

For just the third time in his nearly six-year pontificate, this morning saw B16 preside at an episcopal ordination in St Peter's as the Pope gave the high-hat to five recent appointees to senior posts in the Roman Curia.

Of the high-ranking group, however, one figure was arguably the linchpin of the pontiff's decision to reserve the rite to himself: the newly-named #2 of the Congregation for the Evangelization of Peoples, now Archbishop Savio Hon Tai-Fai SDB, a native of Hong Kong -- and, more to the point, the first-ever Chinese tapped to serve in a top Vatican post.

Called to Rome in December amid escalating Sino-Vatican tensions centering on the church's prerogatives in the People's Republic, the 60 year-old Salesian theologian was a visiting professor at mainland seminaries and gave conferences to priests there over the last two decades, alongside his chief assignment at Hong Kong's formation house. In his new post, Hon (below) becomes second-in-command of the church's vast mission efforts worldwide as deputy to the "Red Pope" -- the Indian chief of the historic Propaganda Fide, Cardinal Ivan Dias.

Keeping the custom of his prior ordinations of bishops in 2006 and 2009, the Pope's homily today was a catechesis on the episcopal office. At this morning's Mass, however, the text's subtleties were conspicuously evocative of the situation of the Chinese church in its calls to perseverance and communion as the "pillars" of the prelates' new ministry and, by extension, "the life of the church."

For the record, the latter "pillar" was referenced nearly 70 times in Benedict's 2007 Letter to Chinese Catholics.

For the rest of the story from Whispers in the Loggia please click here.

You can read more on Archbishop Hon's consecration here.
Posted by Padre Steve at 11:25 AM