Francis: “Even the greatest sins can be forgiven” 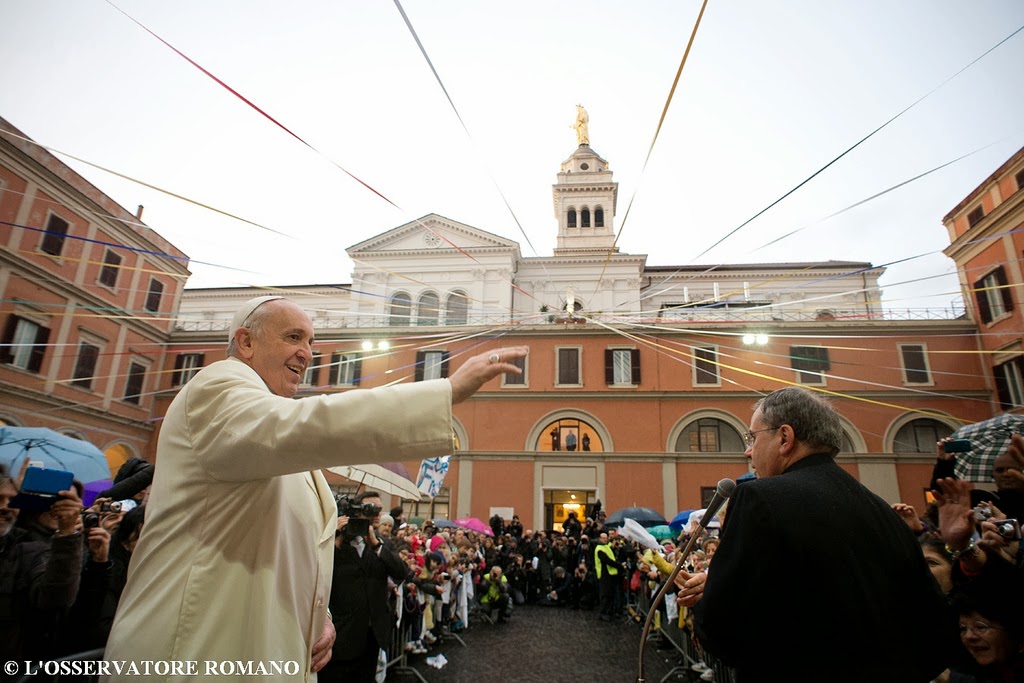 Pope Francis visits the last church built by Don Bosco!  Yesterday he visited the Salesian Basilica of the Sacred Heart in Rome!  The following comes from the Vatican Insider:

This afternoon Francis visited Rome’s Sacro Cuore Basilica, a parish that serves a part of the city considered an “existential periphery”: “Faith is the key to success in life”

“Even lorryfuls of sin can be forgiven. Faith is the key to success in life,” Francis warned. People from all over Rome braved the rain and went to meet Francis, the Pope who wants a poor Church for the poor. They were joined by the homeless people who spend their days out in the freezing cold at Rome’s Termini railway station or the gardens in Piazza Vittorio.

“So often we place our trust in one person, in our brothers and sisters who want to help us but forget about trusting in the Lord. And yet this is the key to success in life: I place my trust in you, that’s the bet we have to make,” Francis said.

The parish of the Basilica dedicated to the Sacred Heart of Jesus and run by the Salesians of Don Bosco, is the fourth parish Francis has visited since his election. The church and oratory were founded by Don Bosco. While at the altar of the Basilica of Our Lady Help of Christians on 16 May 1887 – a year before his death – Don Bosco felt so moved by the memory of what the Virgin Mary had foretold 62 years earlier – “All will become clear to you in time” – that he wept.

There are people who have been tainted by sins that are so great “it would take a lorry to carry them.”  Francis used this imagery to remind faithful of how sinful they can be.

Upon his arrival at the Basilica, Francis was met by Giuseppe Versaldi, Cardinal-Deacon of Sacro Cuore di Gesù and President (though not yet confirmed as such) of Prefecture for the Economic Affairs of the Holy See, the Vicar of Rome Agostino Vallini, the Auxiliary Matteo Zuppi and the Salesian bishop Mario Toso, Secretary of the Pontifical Council for Justice and Peace.

In his homily for the mass celebrated in the the Basilica of Sacro Cuore di Gesù in Rome’s Castro Pretorio area, Francis said “We must listen to John the Baptist who proclaims Jesus as Saviour and must grow, trusting in Jesus.” Focusing on the Gospel passage where Jesus arrives at the Jordan River to be baptised and John the Baptist says: “Behold, the lamb of God who takes away the sins of the world.” “Jesus never stopped being a meek, good and loving lamb that is close to children and the poor; he was there among the people,” Francis said.

“He healed everyone, he taught and prayed, but Jesus was very weak, like a lamb. Still, he had the strength to carry all of our sins on his shoulders. All of them,” Francis continued. “No father, you don’t know what I’ve done in my life. I’ve committed to many sins, a lorry couldn’t hold them,” Francis said illustrating his point. “Often, when we look deep into our conscience, we see big ones, but that’s what he came for, to bring peace tot he world!” “Maybe we feel torment in our hearts, maybe there is darkness in our hearts, we may be sad because we feel guilt: he came to take all of that away, he brings peace, he forgives all,” Francis said.

“This is Jesus’ strength,” Francis said. “His love and meekness.” The Pope invited faithful to “grow, trusting in Jesus.” “We often place our trust in doctors and that’s good because doctors heal us. We place our trust in people, our brothers or sisters and it’s good to have this human trust. But let us not forget to trust in the Lord: this is the key to having success in life: having faith in the Lord.”

And if “trusting” seems like a “gamble”, Francis said the Lord “never lets us down.” This message was aimed especially at young people who are starting out in life: “Jesus never lets us down.” “Let us close our eyes and imagine that scene, on the banks of the River Jordan: While John is baptising Jesus, he says to him:  “Behold, the lamb of God”.”  “Let each one of us say something to Jesus in silence, something from the heart,” the Pope told faithful gathered in the Basilica dedicated to the Sacred Heart of Jesus.

“The Lord Jesus is meek and good, just like a lamb. And he was baptised even though he did not need to be. John felt his strength. Behold, the Lamb of God. This is Jesus who gives us the strength of hope. He is called the Lamb and takes away the sins of the world. With all his love and meekness he never stopped being God and man, filled with love and always by children’s side. He taught and prayed and was very weak but he was strong enough to bear the weight of the world’s evils on his shoulders.”
Posted by Padre Steve at 10:26 AM