Our Lady of Prompt Succor: Patroness of New Orleans 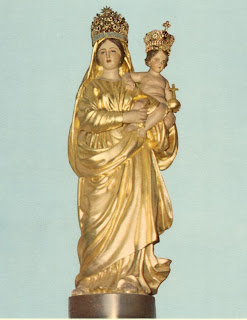 A new year always brings its hopes, resolutions and challenges. 2013 will no doubt be a year with many blessings... as well as great challenges. Developing a deeper relationship with Our Blessed Mother is something that we might all resolve to do as we begin a new year! She is with us as a mother, protector and help! Especially during difficult times we need the sure guidance of Our Lady! Let's entrust this year to the loving care of Our Lady!

The second major miracle occurred in 1815, three years after the disastrous fire. General Andrew Jackson was facing the British in the Battle of New Orleans. There were 15,000 British Troops against 6,000 American troops. It seemed as though the city of New Orleans was doomed. Knowing the terrible fate of the city of New Orleans the Ursuline nuns along with many faithful people of New Orleans gathered in the Ursuline chapel before the statue of Our Lady. They spent the night before the battle praying and crying before the holy statue, begging for the Virgin Mary's intercession. On the morning of January 8, the Very Rev. William Dubourg, Vicar General offered mass at the altar on which the statue of Our Lady of Prompt Succor had been placed. The Prioress of the Ursuline convent, Mother Ste. Marie Olivier de Vezin, made a vow to have a Mass of Thanksgiving sung annually should the American forces win. At the very moment of communion, a courier ran into the chapel to inform all those present that the British had been defeated. General Jackson went to the convent himself to thank the nuns for their prayers: "By the blessing of heaven, directing the valor of the troops under my command, one of the most brilliant victories in the annals of war was obtained." The vow made by Mother Ste. Marie has been faithfully kept throughout the years. 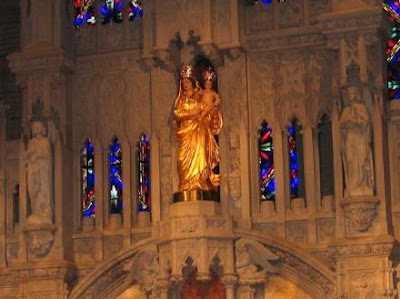 Our Lady of Prompt Succor, ever Virgin Mother of Jesus Christ our Lord and God, you are most powerful against the enemy of our salvation. The divine promise of a Redeemer was announced right after the sin of our first parents; and you, through your Divine Son, crushed the serpent's head. Hasten, then, to our help and deliver us from the deceits of Satan. Intercede for us with Jesus that we may always accept God's graces and be found faithful to Him in our particular states of life. As you once saved our beloved City (New Orleans) from ravaging flames, and our Country from an invading army, have pity on us and obtain for us protection from hurricanes and all other disasters. (Silent pause for individual petitions.) Assist us in the many trials which beset our path through life. Watch over the Church and the Pope as they uphold with total fidelity the purity of faith and morals against unremitting opposition. Be to us truly Our Lady of Prompt Succor now and especially at the hour of our death, that we may gain everlasting life through the merits of Jesus Christ Who lives and reigns with the Father and the Holy Spirit, one God world without end. Amen. -prayer from the National Shrine of Our Lady of Prompt Succor
To learn more about this devotion please click here!
Posted by Padre Steve at 5:00 AM

Thanks for this post. With all the things going on today it is a tad uplifiting

I was thrilled to see this statue a few years ago on a rare visit to my birthplace, NO. I hope those who have these amazingly beautiful churches appreciate them.

How awesome about Fr. Seelos' proclamation.