Saint of the day: Thomas More 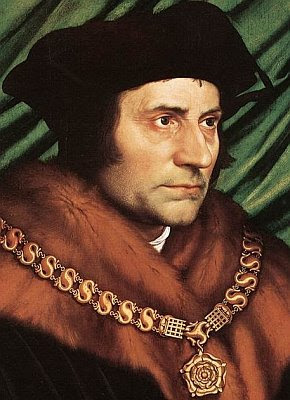 
St. Thomas More, Martyr (Patron of Lawyers) St. Thomas More was born at London in 1478. After a thorough grounding in religion and the classics, he entered Oxford to study law. Upon leaving the university he embarked on a legal career which took him to Parliament. In 1505, he married his beloved Jane Colt who bore him four children, andwhen she died at a young age, he married a widow, Alice Middleton, to be a mother for his young children. A wit and a reformer, this learned man numbered Bishops and scholars among his friends, and by 1516 wrote his world-famous book "Utopia". He attracted the attention of Henry VIII who appointed him to a succession of high posts and missions, and finally made him Lord Chancellor in 1529. However, he resigned in 1532, at the height of his career and reputation, when Henry persisted in holding his own opinions regarding marriage and the supremacy of the Pope. The rest of his life was spent in writing mostly in defense of the Church. In 1534, with his close friend, St. John Fisher, he refused to render allegiance to the King as the Head of the Church of England and was confined to the Tower. Fifteen months later, and nine days after St. John Fisher's execution, he was tried and convicted of treason. He told the court that he could not go against his conscience and wished his judges that "we may yet hereafter in heaven merrily all meet together to everlasting salvation." And on the scaffold, he told the crowd of spectators that he was dying as "the King's good servant-but God's first." He was beheaded on July 6, 1535. His feast day is June 22nd.
Posted by Padre Steve at 5:00 AM

Wow, Padre Steve. When More/Scofield gets to the part regarding the marriage on the third clip, it's as if today it could be about gay marriage. Right now there is only the "killing" of a person's reputation. Hopefully, it won't get to the person.

St. Thomas pray for us. Pray that we have the wits to defend the right of conscience.

In today's Prayers and Intercessions of the LOTH I asked St. Thomas More to pray for all those lawyers who are in the House and the Senate.

May G-d help our country.