Pope Francis: When Christians lack difficulties, 'something is wrong' 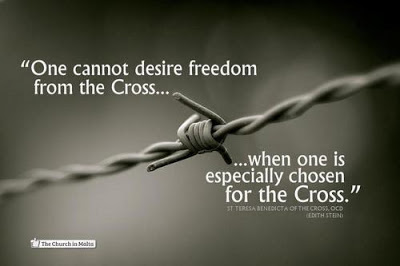 “Many Christians, tempted by the spirit of the world, think that following Jesus is good because it can become a career, they can get ahead,” the Pope said.

He suggested this temptation is common for a Christian who is “a great friend of the spirit of the world, of worldliness.”

“You cannot remove the cross from the path of Jesus, it is always there,” he added.

Pope Francis delivered his homily at morning Mass at the chapel of the Casa Santa Marta residence. Archbishop Rino Fisichella and Monsignor José Octavio Ruiz Arenas, respectively the president and secretary of the Pontifical Council for the New Evangelization, concelebrated Mass.

He explained that the worldly spirit “reduces Christian activity to doing social good.”

“As if Christian life was a gloss, a veneer of Christianity,” he said. “The proclamation of Jesus is not a veneer: the proclamation of Jesus goes straight to the bones, heart, goes deep within and changes us. And the spirit of the world does not tolerate it, will not tolerate it, and therefore, there is persecution.”
Just as Pope Francis criticized career-based Christianity, he also warned about a solely culture-based approach to the faith.

He criticized the attitude of following Jesus because one was born in a Christian culture. He said this ignores “the necessity of true discipleship of Jesus, the necessity to travel his road.”

“If you follow Jesus as a cultural proposal, then you are using this road to get higher up, to have more power. And the history of the Church is full of this, starting with some emperors and then many rulers and many people, no?” the Pope observed.

The Holy Father said that this attitude is present even among some priests and bishops.

He concluded with an exhortation to follow Jesus Christ truly.

“Following Jesus is just that: going with him out of love, behind him: on the same journey, the same path. And the spirit of the world will not tolerate this and what will make us suffer, but suffering as Jesus did,” he said.

“Let us ask for this grace: to follow Jesus in the way that he has revealed to us and that he has taught us. This is beautiful, because he never leaves us alone. Never! He is always with us. So be it.”
Posted by Padre Steve at 3:00 PM