Saint of the day: Kateri Tekakwitha 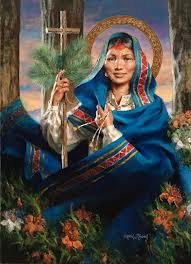 Today is the memorial of St. Kateri Tekakwitha! Let's continue to pray through her intercession for all those who suffer persecution for the faith!

St. Kateri has been accorded the title of the patroness of the environment and ecology and is dear to the hearts of many Native Americans. She was born in upstate New York, near Auriesville. Both of her parents were Native Americans. Her father was a Mohawk chief and her mother an Algonquin, who was raised Catholic.

In her lifetime Kateri was frequently afflicted with illness and became partially blind. In order for her to walk, she groped her way around as she walked. She was then named, Tekakwitha which literally means, “One who walks groping for her way.”

St. Kateri was baptized when she was 20 years old after being catechized by Father de Lambertville S.J. After her baptism, Kateri was considered an outcast by her tribal community. Living on her own, she professed a vow of perpetual virginity. Poor health and the effects of small pox led to her death in 1680 at the age of 24.


In 1943 Kateri was declared venerable and then in 1980 she was declared blessed by Pope John Paul II. She was canonized by Pope Benedict on October 21, 2012.  She is the first Native American to be canonized and was the patroness of the 2002 World Youth Day.
Posted by Padre Steve at 5:01 AM

Yeah! This is so wonderful!

Hello, that is nice picture with beautiful emotion, can you inform me how old is it? keep it up. God Bless you!
christmas

This Camino of Mine said...

Thank you for posting this wonderful video. I was able to visit the Shrine of the North American Martyrs last spring with my family. Did you know that a miracle through the intercession of Bl. Kateri out here in my diocese of Seattle has recently been sent to the Vatican for investigation and approval?