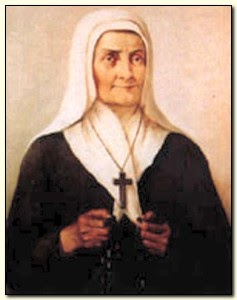 The following comes from The Catherine of Sienna Institute:


One of my favorite stories is about Bl. Catherine Jarrige, whose feast day is July 4.   She lived during the French Revolution and the accompanying supression of the Catholic Church and demonstrated a level of inspired chuztpah that takes your breath away.


Priests who not declare their first allegience to the revolutionary government were known as "non-juring" priests and in November of 1791, they were suspect and to be arrested.  Most were arrested and the majority were kept in prison ships where the majority died within a few months from the appalling conditions.
Persecution evolved into active "de-Christianization" by 1793.  In October of 1793, a law was passed sentencing non-juring priests and those who harbored them to instant death.  Less than a month later, the Goddess Reason was installed on the high altar of Notre Dame Cathedral.
It was in this climate that Catherine, a lacemaker and professed third order Dominican, who was known for her great generosity to the poor "showed her quality".  Catherine created a priest underground that slipped clergy in and out of her area successfully, ensured priests were fed and safe, and that the sacramental needs of the community were still met.  No baby went unbaptized, no one died without confession.  She only lost one priest, whom she accompanied fearlessly to the guillotine.  After his execution, Catherine took some of the martyr's blood and smeared it on the eyes of a blind child who was instantly healed.  At seeing the miracle, the executioner began to cry "I'm lost, I'm lost.  I've killed a saint!"
One particularly amusing story about her exploits comes down to us.  Catherine was guiding a priest, disguised as a revolutionary peasant, out of the area.  To prevent discovery, Catherine has doused the disguised priest with wine and told him to walk as though he were drunk and let her do the talking.  As they walked along, they encountered a revolutionary soldier.  Thinking quickly, Catherine began to yell at her walking companion loudly as though she were scolding her husband.  The soldier sympathized with Catherine's 'husband': "Citizen, if I had a wife like that, I'd drown her in the nearest river."  The undercover priest is said to have passionately agreed. "Citizen, so would I!"
Catherine was instrumental in re-establishing the life of the Catholic community after the revolution and lived to be 82.  It was said that as a young woman, she loved to dance the Bouree - a local country dance but gave it up after she was professed as a Dominican to focus upon her ministry to the poor.
Posted by Padre Steve at 9:00 AM