Saint of the day: Titas Brandsma 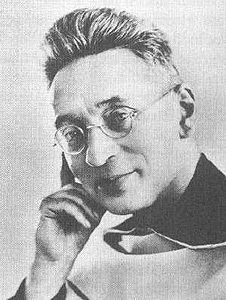 Pious youth from a pious family; three of his four sisters were nuns, and a brother became a Franciscan priest. Had the nickname Shorty. Good student who felt an early call to the priesthood. Entered a Franciscan minor seminary from ages 11 to 17, but health problems, primarily an intestinal disorder, prevented him becoming a Franciscan. Joined the Carmelites at Boxmeer, taking the name Titus, and making his first vows in 1899.

Spoke Italian, Frisian, Dutch, and English, and could read Spanish. Translated the works of Saint Teresa of Avila from Spanish to Dutch, publishing them in 1901. Ordained in 1905 at age 24. Doctorate in philosophy from the Pontifical Gregorian Univeristy in Rome in 1909 at age 28. Taught at the Carmelite seminary at Oss, Netherlands. Editor of the local daily newspaper in 1919; often seen working with a cigar in his mouth.

In 1935 he wrote against anti-Jewish marriage laws, which brought him to the attention of the Nazis. He later wrote that no Catholic publication could publish Nazi propaganda and still call itself Catholic; this led to more attention. Continually followed by the Gestapo, the Nazi attention led to his arrest on 19 January 1942. For several weeks he was shuttled from jail to jail, abused, and punished for ministering to other prisoners.

Deported to the Dachau concentration camp in April 1942. There he was overworked, underfed, and beaten daily; he asked fellow prisoners to pray for the salvation of the guards. When he could no longer work, he was used for medical experiments. When he was no longer any use for experimentation, he was murdered. Martyr.

You can read his letter from prison here.
Posted by Padre Steve at 5:00 AM