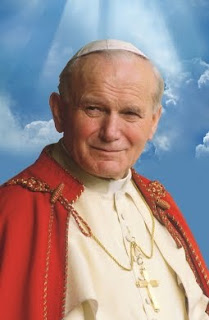 For many years Karol believed God was calling him to the priesthood, and after two near fatal accidents, he responded to God's call. He studied secretly during the German occupation of Poland, and was ordained on 1 November 1946. In these years he came to know and practice the teachings of Saint Louis Marie Montfort and Saint John of the Cross. Earned his Doctorate in theology in 1948 at the Angelicum in Rome, Italy.

Parish priest in the Krakow diocese from 1948 to 1951. Studied philosophy at the Jagiellonian University at Krakow. Taught social ethics at the Krakow Seminary from 1952 to 1958. In 1956 he became a professor at the University of Lublin. Venerable Pope Pius XII appointed Wojtyla an auxiliary bishop in Krakow on 4 July 1958. Servant of God, Pope Paul VI appointed him Archbishop of Krakow on 30 December 1963.

Wojtyla proved himself a noble and trustworthy pastor in the face of Communist persecution. A member of the prepatory commission, he attended all four sessions of Vatican II; is said to have written Gaudium et spes, the document on the Church in the Modern World. He also played a prominent role in the formulation of the Declaration on Religious Freedom. Following the Council, Pope Paul VI, appointed Karol Wojtyla cardinal on 26 June 1967.

In 1960 he published his most famous written work, Love and Responsibility. Pope Paul VI, delighted with its apologetical defense of the traditional catholic teaching of marraige, relied extensively on Archbishop Wojytla's counsel in writing Humanae Vitae. In 1976 he was invited by Pope Paul VI to preach the lenten sermons to the members of the Papal Household.

Archbishop Wojtyla became the first non-Italian pope since Adrian VI. He took the name of his predecessors (John, Paul, John Paul) to emphasize his desire to continue the reforms of the Council.

John Paul II is the most traveled pope in history, having visited nearly every country in the world which would receive him. As the Vicar of Christ he has consecrated each place that he has visited to the Blessed Virgin Mary. On 13 May 1983 he went to Fatima to consecrate the world to the Immaculate Heart of Mary. He later repeated the consecration of the world to Mary in union with all the Bishops of the Catholic Church, in fulfillment of Our Lady's promises at Fatima.

In the summer of 1995, Pope John Paul II began a lengthy catechisis on the Blessed Virgin Mary during his weekly Angelus addresses, culminating on 25 October 1995, with his instruction on Our Lady's active participation in the Sacrifice of Calvary. This active participation of Our Lady at Calvary is called the corredemption. Already in 1982 and 1985 Pope John Paul II used the term "corredemptrix" in reference to Our Lady in public addresses. This is significant, for he is the first Pope to do so since Pope Benedict XV at whose prayer Our Lady came to Fatima to reveal Her Immaculate Heart. Since the time of Pope Benedict XV, this terminology was under review by the Holy See; the present Pope's usage is a confirmation of this traditional view of Mary's role in salvation history.