Healing through the Blessed Sacrament 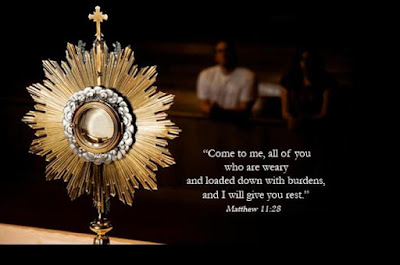 The following comes from the Georgia Bulletin:

A healing service flowed from the opening Mass of the Eucharistic Congress as a monstrance holding the Blessed Sacrament was placed on the altar.

“The Holy Spirit has already begun the work of healing he intends to accomplish,” said Father Tim Hepburn, leading the bilingual service with Father Jorge Carranza.
Encouraging the faith of those seeking healing, Father Hepburn recalled Scripture stories of Paul and Silas, beaten and in prison, who began to sing praises to God despite their suffering. As they sang the building began to shake and the doors of the jail flew open.
“We are entering into the worship of God … and as we enter into our worship of the Lord, Jesus is going to open doors for our healing, even now,” he said.
The two priests alternated praying in English and Spanish, while musicians quietly sang consoling and simple words of faith. “Earth has no sorrow that heaven can’t heal. … All who are broken, lift up your face. O wanderer, come home. You’re not too far.”
Many stories in Scripture tell of people crying out, “Son of David, have mercy on me,” Father Hepburn said. “There is story after story of people who are sick, who are in a dark place, who are depressed, who found this cry in their hearts.”
“Can you remember one time in the Bible when Jesus said no? There is not one time. … We want you to cry out. This is a healing service and this is the place where you cry out, ‘Son of David, have mercy on me.’”
Quietly, he called forward teams of lay people who had volunteered and been trained to assist at the service. While they were blessed and they went to prayer stations on the perimeter of the hall, identified as Spanish or English prayer teams, Father Hepburn reminded everyone that the presence of Jesus in the Blessed Sacrament on the altar was the focus. Those who wanted individual prayer went to the prayer stations while the rest of the congregation continued to pray and sing worship songs, following the lead of the priests and musicians.
Inspired by the Holy Spirit, the priests voiced prayers for anyone who felt they had been forgotten, for couples who yearn for children and have been unable to conceive a child or adopt a child, for the broken-hearted, for those with mental health problems, and for other needs.
One by one, people began to draw closer to the monstrance. They knelt in the center aisle of the hall. Some were weeping. Throughout this time, the prayer teams around the edge of the room individually ministered to people seeking prayer. They continued to do so for more than an hour, even after Benediction was prayed and the monstrance was taken from the hall.

“Jesus is the healer”

César Soto of St. Joseph Church, in Marietta, was one drawn toward the monstrance.
Afterward, he explained that he experienced a conversion beginning four years ago.
“It came the hard way, but I thank him because he didn’t come for the saints. He came for us, for the sinners,” said Soto, who works as a cook.
He was diagnosed with cancer affecting his tongue. The doctor told his family he might not be able to speak after surgery, but he has kept his speech and uses it to tell other people about Jesus, he said.
“I wanted everyone to know about him. Lord, you allowed me to talk again. I want to talk about you. … At the beginning I said, why me. Now I know he is using me for the conversion of my family, the conversion of my co-workers.”
Read the rest here.
Posted by Padre Steve at 10:00 AM