Saint of the day: Peter Canisius 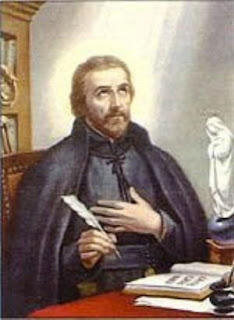 Today we remember St. Peter Canisius. The following come from the Catholic Online site:
In 1565, the Vatican was looking for a secret agent. It was shortly after the Council of Trent and the pope wanted to get the decrees of the Council to all the European bishops. What would be a simple errand in our day, was a dangerous assignment in the sixteenth century. The first envoy who tried to carry the decrees through territory of hostile Protestants and vicious thieves was robbed of the precious documents. Rome needed someone courageous but also someone above suspicion. They chose Peter Canisius. At 43 he was a well-known Jesuit who had founded colleges that even Protestants respected. They gave him a cover as official "visitor" of Jesuit foundations. But Peter couldn't hide the decrees like our modern fictional spies with their microfilmed messages in collar buttons or cans of shaving cream. Peter traveled fromRome and crisscrossed Germany successfully loaded down with the Tridentine tomes -- 250 pages each -- not to mention the three sacks of books he took along for his own university!

Why did the Vatican choose Peter Canisius for this delicate task?

Born in Holland in 1521, Peter had edited and written several volumes on Church history and theology, been a delegate to the Council of Trent, and reformed the Germanuniversities from heresy. Called to Vienna to reform their university, he couldn't win the people with preaching or fancy words spoken in his German accent. He won their hearts by ministering to the sick and dying during a plague. The people, the king, and the pope all wanted to make Peter bishop of Vienna, but Peter declined vigorously and administered the diocese for a year.

For many years during the Reformation, Peter saw the students in his universities swayed by the flashy speeches and the well-written arguments of the Protestants. Peter was not alone in wishing for a Catholic catechism that would present true Catholic beliefs undistorted by fanatics. Finally King Ferdinand himself ordered Peter and his companions to write a catechism. This hot potato got tossed from person to person until Peter and his friend Lejay were assigned to write it. Lejay was obviously the logical choice, being a better writer than Peter. So Peter relaxed and sat back to offer any help he could. When Father Lejay died, King Ferdinand would wait no longer. Peter said of writing: "I have never learned to be elegant as a writer, but I cannot remain dumb on that account." The first issue of the Catechism appeared in 1555 and was an immediate success. Peter approachedChristian doctrine in two parts: wisdom -- including faith, hope, and charity -- and justice-- avoiding evil and doing good, linked by a section on sacraments.

Because of the success and the need, Peter quickly produced two more versions: a Shorter Catechism for middle school students which concentrated on helping this age group choose good over evil by concentrating on a different virtue each day of the week; and a Shortest Catechism for young children which included prayers for morning and evening, for mealtimes, and so forth to get them used to praying.

As intent as Peter was on keeping people true to the Catholic faith, he followed the Jesuit policy that harsh words should not be used, that those listening would see an example of charity in the way Catholics acted and preached. However, his companions were not always as willing. He showed great patience and insight with one man, Father Couvillon. Couvillon was so sharp and hostile that he was alienating his companions and students. Anyone who confronted him became the subject of abuse. It became obvious that Couvillon suffered from emotional illness. But Peter did not let that knowledge blind him to the fact that Couvillon was still a brilliant and talented man. Instead of asking Couvillon to resign he begged him to stay on as a teacher and then appointed him as his secretary. Peter thought that Couvillon needed to worry less about himself and pray more and work harder. He didn't coddle him but gave Couvillon blunt advice about his pride. Coming from Peter this seemed to help Couvillon. Peter consulted Couvillon often on business of the Province and asked him to translate Jesuit letters from India. Thanks to Peter , even though Couvillon continued to suffer depression for years, he also accomplished much good.

Peter died in December 21, 1597. He is known as the Second Apostle of Germany and was named a Doctor of the Church.
Posted by Padre Steve at 5:00 AM