Saint of the day: Stephen the Martyr 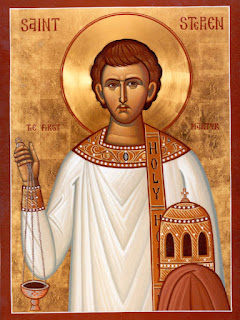 On December 26, the universal church will commemorate the death of St. Stephen, the first man to give his life in witness to the Faith.


St. Stephen was a deacon in the early church. The sixth chapter of the Acts of the Apostles says that, Stephen was “a man filled with faith and with the Holy Spirit... filled with grace and fortitude.” The Bible also notes that Stephen was a gifted orator and that his logic was sound. The conversions of many people are attributed to him.


However, his outspokenness provoked the ire of some of his listeners and he was accused of blaspheming against Moses and against God. He was brought before the high priest and many false witnesses testified against him.


In his defense, he gave an eloquent analysis of Salvation History and the love and mercy of God. He also recounted Israel's repeated ungratefulness towards their God. However, it didn't sway his accusers who proceeded to take him outside the city and stone him.


As he was about to die, Stephen looked up to heaven and said, “Behold, I see the heavens opened, and the Son of man standing at the right hand of God.” Then, as he was being stoned, he cried out, ““Lord Jesus, receive my spirit.”


His last words, as the stoning had brought him to his knees were, “Lord, do not hold this sin against them.”
Posted by Padre Steve at 5:00 AM