Pope Francis to Priests: Get involved in the lives of the people 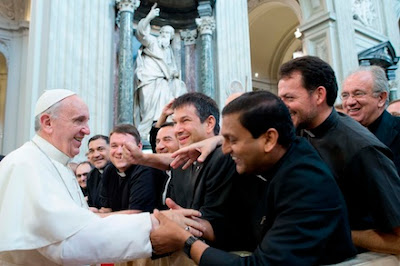 The following comes from the Vatican Insider:


Pope Francis has exhorted Catholic priests not to see people who approach them for spiritual help merely as “cases” to be handled but to instead enter into the complications of people’s lives, unafraid of being drawn in to unclear or messy situations.

In a series of three reflections Thursday for thousands of priests in Rome for celebrations surrounding the ongoing Jubilee year of mercy, the pontiff said simply: “Mercy gets its hands dirty.”

The pope said he had heard many clergy say “very clerical” things in describing people’s situations to others such as saying “I have found this case,” as if to indicate: “I won’t touch it, I won’t dirty my hands. I’ll make a ’clean’ pastoral work.”
“Mercy touches, it gets involved, it gets caught up with others, it gets personal,” Francis told the priests. “It does not approach ’cases’ but persons and their pain.”
“Mercy exceeds justice; it brings knowledge and compassion; it leads to involvement,” the pope continued. “By the dignity it brings, mercy raises up the one over whom another has stooped to bring help. The one who shows mercy and the one to whom mercy is shown become equals.”

Thousands of clergy have come to Rome from around the world this week for the special Jubilee for Priests, part of the holy year celebrations. As a culmination of the week’s events, the clergy will celebrate Mass with Francis Friday in St. Peter’s Square.

The pontiff used the reflections Thursday to give a lengthy, detailed and deeply spiritual overview of his understanding of God’s mercy.

During the first reflection he focused on what he called the “embarrassed dignity” shown in the Gospel parable of the prodigal son, who is welcomed home by his father after foolishly spending his inheritance.

“That is how we have to see ourselves: poised between our utter shame and our sublime dignity,” Francis told the priests. “Dirty, impure, mean and selfish, yet at the same time, with feet washed, called and chosen to distribute the Lord’s multiplied loaves, blessed by our people, loved and cared for.”

“Only mercy makes this situation bearable,” said the pope.

The pontiff said that the celebration the father in the parable throws for his son at his returning home does not indicate that mercy is naive or foolish, but rather that mercy “makes it possible to look to the future in a different way.”

“It is not that mercy overlooks the objective harm brought about by evil,” said Francis. “Rather, it takes away evil’s power over the future. It takes away its power over life, which then goes on.”

“Mercy is the genuine expression of life that counters death, the bitter fruit of sin,” said the pope. “As such, it is completely lucid and in no way naïve.”

“It is not that it is blind to evil; rather, it sees how short life is and all the good still to be done,” he said. “That is why it is so important to forgive completely, so that others can look to the future without wasting time on self-recrimination and self-pity over their past mistakes.”

“In starting to care for others, we will examine our own consciences, and to the extent that we help others, we will make reparation for the wrong we ourselves have done,” said the pontiff. “Mercy is always tinged with hope. Mercy is the mother of hope.”

In his second reflection of the day at the Basilica of St. Mary Major the pontiff reflected on the role of sin, which he said is “the vessel of mercy.”

“Our sin is usually like a sieve, or a leaky bucket, from which grace quickly drains,” said Francis.

“That is why the Lord had to teach Peter the need to ’forgive seventy times seven,’” said the pope. “God keeps forgiving, even though he sees how hard it is for his grace to take root in the parched and rocky soil of our hearts. He never stops sowing his mercy and his forgiveness.”

The pontiff then said that the “real vessel of mercy” is “the mercy which each of us received and which created in us a new heart.”

“Here we enter more deeply into the mystery of the Son, Jesus, who is the Father’s mercy incarnate,” said the pope. “Here too we can find the definitive icon of the vessel of mercy in the wounds of the risen Lord.”

Explaining that Jesus kept the wounds of his crucifixion after his resurrection, and that he may even have them in Heaven now, Francis said: “Those wounds remind us that the traces of our sins, forgiven by God, never completely heal or disappear; they remain as scars.”

“God’s mercy is in those scars,” said Francis. “In the scars of the risen Christ, the marks of the wounds in his hands and feet but also in his pierced heart, we find the true meaning of sin and grace.”

“As we contemplate the wounded heart of the Lord, we see ourselves reflected in him,” said the pope. “His heart, and our own, are similar: both are wounded and risen. But we know that his heart was pure love and was wounded because it willed to be so; our heart, on the other hand, was pure wound, which was healed because it allowed itself to be loved.”
Posted by Padre Steve at 11:00 AM