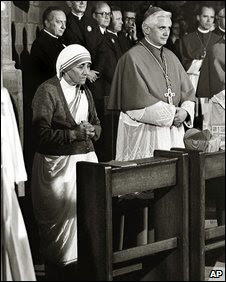 
Why was Mother Teresa so famous? Because she lived for and in the love of God, says Benedict XVI.

The Pope made this reflection during a luncheon that he offered for the poor on Dec. 26 in the Paul VI Hall.

The event was held to mark the 100th anniversary of the birth of Blessed Teresa of Calcutta, founder of the Missionaries of Charity. Several members of the congregation from communities around Rome assisted the Pontiff in the luncheon, which was attended by 350 people and 150 religious.

The Holy Father addressed the participants, stating, "To those who ask why Mother Teresa became as famous as she did, the answer is simple: because she lived humbly and discretely for and in the love of God."

"She herself said that her greatest prize was to love Jesus and serve him in the poor," Benedict XVI continued. "Her diminutive figure, her hands joined in prayer or caressing the sick, a leper, the dying, a child, was the visible sign of an existence transformed by God."

He acknowledged that "in the night of human pain she made the light of divine love shine and helped many hearts to find the peace that only God can give."

The Pope affirmed that "Blessed Teresa of Calcutta showed charity to everyone without distinction, but with a preference for the poor and abandoned: a luminous sign of God's paternity and goodness."

He added: "In all people she was able to recognize the face of Christ, whom she loved with her entire being.

"She continued to encounter the Christ she adored and received in the Eucharist in the streets and lanes of the city, becoming a living 'image' of Jesus who pours the grace of merciful love onto man's wounds."

"In Blessed Teresa of Calcutta we all see how our lives can change when we meet Jesus," the Pontiff affirmed, "how they can become a reflection of the light of God for other people."

"Her mission continues through those who, here as elsewhere in the world, live the charism of being missionaries of charity," he added.

The Holy Father expressed gratitude to the religious for their "humble and discreet presence, hidden to the eyes of mankind but extraordinary and precious to the heart of God."

He continued, "Your life witness shows man -- who often searches for illusory happiness -- where true joy is to be found: in sharing, in giving, in loving with the same gratuitousness as God, which breaks all the logic of human selfishness."

Benedict XVI concluded, "Know that the Pope loves you and carries you in his heart, gathering you all together in a paternal embrace."
Posted by Padre Steve at 9:00 AM