Feast of the day: Wenceslaus 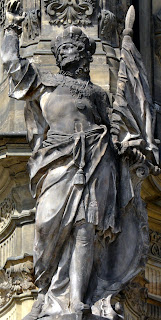 St. Wenceslaus (903-29), also known by Vaclav, was born near Prague, and was the son of Duke Wratislaw. He was taught Christianity by his grandmother, St. Ludmila. The Magyars, along with Drahomira, an anti-Christian faction murdered the Duke and St. Lumila, and took over the government. Wenceslaus was declared the new ruler after a coup in 922. He encouraged Christianity. Boleslaus, his brother, no longer successor to the throne, after Wenceslaus' son was born, joined a group of noble Czech dissenters. They invited Wenceslaus to a religious festival, trapped and killed him on the way to Mass. He is the patron saint of Bohemia and his feast day is Sept. 28.
Posted by Padre Steve at 7:00 AM