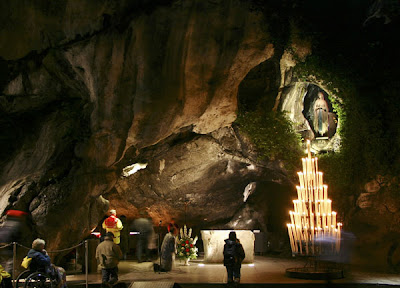 The miracle of Lourdes continues as a new modern miracle is reported at Catholic News Agency. Hat tip to Spirit Daily for this one! The following comes from CNA:

A woman who suffered from a severe nerve disease now no longer uses her wheelchair and has even gone for a run, after she visited to Lourdes earlier in August. The woman credits the baths at Lourdes for the ‘gift’ of her improved health.

Antonia Raco, 50, had been in a wheelchair for four years because of Amyotrophic Lateral Sclerosis (ALS), also known as Lou Gehrig’s Disease. She made a trip to the shrine at Lourdes on August 5.

''Ever since I came back I have been walking, doing everything normally, and I've even run,'' Raco told ANSA.
Raco, who is from a village near the southern Italian city of Potenza, said she would rather talk about the change as “a gift, an act of mercy, rather than a miracle.”

She reported to ANSA that when she was in the healing bath at Lourdes, “I felt a voice encouraging me and a strong pain in my legs.”

On Tuesday, Raco will be examined by a specialist at the prestigious Molinette Hospital in Turin. The hospital’s specialist, Adriano Chiro, has been treating her since 2006, according to Italian news reports.

Lourdes, France has been the site of pilgrimage and devotion since the 1858 Marian visions of peasant girl St. Bernadette Soubirous at a grotto.

Following the guidance of the Virgin Mary, Bernadette scraped away soil besides the grotto until a spring of water began trickling out.

The spring produces 27,000 gallons of water every day. Many miracles have been attributed to the shrine’s waters and Our Lady of Lourdes
Posted by Padre Steve at 5:00 PM

9 of my children are presently there with my husband & a group..

Our Lady bless your family! I wish you the best of good fortune!