Cardinal Dolan on the Death of Billy Graham 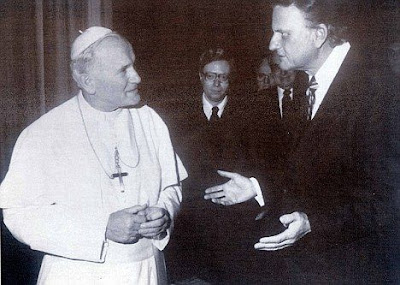 
Archbishop of New York Cardinal Timothy Dolan has paid tribute to preacher Billy Graham, who has died at the age of 99.
Graham was a Southern Baptist evangelical preacher, but his preaching was much-admired by Catholics.
“As anyone growing up in the 1950’s and 1960’s can tell you, it was hard not to notice and be impressed by the Reverend Billy Graham,” Cardinal Dolan said.
“There was no question that the Dolans were a Catholic family, firm in our faith, but in our household there was always respect and admiration for Billy Graham and the work he was doing to bring people to God.
“Whether it was one of his famous Crusades, radio programs, television specials, or meeting and counseling the presidents, Billy Graham seemed to be everywhere, always with the same message: Jesus is your Savior, and wants you to be happy with Him forever.
“As an historian, my admiration for him only grew as I studied our nation’s religious past, and came to appreciate even more the tremendous role he played in the American evangelical movement.
“May the Lord that Billy Graham loved so passionately now grant him eternal rest.”
Pope John Paul II was especially warm towards Graham, reportedly exclaiming in one meeting: “Listen, Graham, was are brothers!” Graham, in turn, described Pope John Paul II as the “moral leader of the world”.
Posted by Padre Steve at 10:52 AM