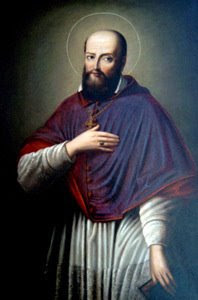 Today is the feast of St. Francis de Sales! Francis was the favorite saint of St. John Bosco and he is one of the principle patrons of the Salesians of Don Bosco. Don Bosco wished for his Salesians to have the same loving kindness of the beloved Bishop of Geneva! The following comes from the Catholic Information Network:

Francis Bonaventure was born on August 21st, 1567, at the castle of Sales in Savoy; his father was lord of Nouvelles and (by his marriage) of Boisy; as the eldest son of a prominent nobleman, he was destined, by a father proud of his nobility, for a career in the world and a seat in the senate of Savoy. He received his school education at Annecy which, in its beautiful setting by the lake, was to be the scene of his life-work. His outward charm of manner could not conceal from his fellows the depth of his religious life; but it masked a firmness of purpose leading him gradually towards the priesthood, in spite of all the contrary pressures of his feudal background. When sent to Paris to complete his education in 1582 he refused to attend the College of Navarre, his father's choice, because he feared its temptations, and chose instead the Jesuit College of Clermont. Here he came in contact with the riches of post-Tridentine humanism, enlisting the classical learning of the Renaissance in the service of the Christian mind and spirit; Francis wore the garb of that humanism more easily and naturally than any: as he said, those who would be religious should avoid ostentation but wear clothes that fitted them.

He struggled with doubts about his hope of salvation; one day in the church of St Etienne des Gres he prayed fervently in his trouble before a statue of our Lady, taking at the same time a vow of chastity; the temptation fell away from him 'like the scales of leprosy.' From 1586 to 1591 he attended the University of Padua to study law and left after taking the Doctor's degree. But his vocation was now clear, though only to himself; he surmounted with quiet, firm dignity the inevitable clash with his father; he was ordained priest on May 13th, 1593, becoming a senior canon of the chapter of Geneva.

His fervor soon brought him to the notice of Claude Granier, bishop of Geneva, and he was allowed to offer himself for what seemed the well-nigh impossible task of winning back from Calvinism the people of the Chablais district. To an age torn by the folly and scandal of religious wars Francis brought a spirit of mission which was charitable and persuasive; but his early efforts in the Chablais were bitterly disappointing, and he underwent a hard discipline of insult and of disillusion with the promises of princes.

Sent to Paris in 1602 to negotiate about the condition of Catholics in the reconverted territories, he came in contact with the great figures of the religious and mystical revival taking place behind the worldly facade of the court of Henri IV: Henri de Joyeuse, Berulle, and Mme Acarie (Bd Mary of the Incarnation). In July on the death of Granier he became bishop of Geneva and returned to Annecy. Constantly journeying and preaching, without pomp or fuss he gradually drew the entire diocese into the intimate habitude of his own holiness. He exerted himself particularly in the sacrament of penance, carrying his knowledge of the soul to both prince and peasant. One of the most celebrated of his penitents was St Joan Frances de Chantal, whom he entrusted with his scheme for the foundation of a new order, the Visitation, 'an order where the charity and gentleness of Jesus Christ shall rule, where the weak and infirm can be admitted, which shall be able to give attendance to the sick and to visit the poor.'

In the midst of his constant pastoral work he found time to write the book which has made him best known to succeeding ages, the Introduction to the Devout Life (1609), a work which sprang immediately from his care for souls, and which was based particularly on his counsel to another penitent, Mme de Charmoisy, on the problem of how to live a Christian life in the world.

When he visited Paris again in 1618 it was as a famous preacher and an acknowledged spiritual force. He preached often twice a day with the unpretentious simplicity and directness of a great, highly disciplined intellect. In his last years he was dying slowly from overwork, moving humbly among all ranks, ever mindful of the necessary detail, a saint who provides a pattern for the responsible administrator in an age busier and more hurried than his own. He died on December 28th, 1622, at Lyons, with the word 'Jesus' on his lips. He was canonized by Alexander VII in 1665.

Francis's great work was to show how ordinary life can be sanctified-every type of ordinary life, but especially that of busy, well-to-do people. No problem is too small for him, dress, entertainments, flirtations, the daily interchange of husband and wife, but he deals with them all so as to guide his reader to the final end: the love of God and the imitation of Christ. In his teaching there is no perpetual struggle between nature and grace, flesh and spirit, no violent tension wresting the human life that would be Christian out of and away from its ordinary sphere of social duties. But neither is there any descent into softness or sentimentality; with all his grace and poise and gentleness he demands an approach to perfection and a total harmony of the personality in the framework of the Christian virtues. He learned from the Renaissance the easy grace of style which is also a graciousness of mind; he added, however, the traditional rural wisdom of Savoy, that sense of the Catholic verities which he had always taken for granted and which for that very reason he could make more lucidly explicit to the outsider or to those in trouble. Sweetness and graciousness are his key-words (they come in the collect of his Mass); they represent a reconciliation of the outward beauty and the tough inner core of the Christian life. In the age after Calvin and before Jansenism he had much to teach the world, and has, too, in our own, when a preference for the extraordinary and melodramatic solution in every province from theology to fiction may make us overlook someone who tells us that saintliness is both desirable and possible.
Posted by Padre Steve at 7:55 AM

Did you hear that Kmiec is in the running for US Amb. to the Vatican???

thank you for posting this video.

So nice to see this about the Patron Saint of my church - St. Francis de Sales in Mableton, GA. Our parish is uses the extraordinary rite, and is staffed by priests from the FSSP. If you ever are in the Atlanta area, please look us up.

I really enjoyed all the info about Rich Mullins.