Pius XIIs presumed miracle under review, and its connection to John Paul II 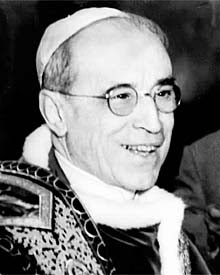 Some details of the case under investigation regarding a possible miracle attributed to Venerable Pope Pius XII have been made public. The story features not just one former Pontiff, but two.

Tornielli reported that this case was brought to the attention of Benedict XVI shortly before he approved a measure on Dec. 19, 2009 venerating Pope Pius XII's life of "heroic virtue," whose cause had been on-hold for the previous two years.

In 2005, a teacher of 31 years of age was expecting her third child in the city of Castellammare di Stabia. She began to have strong pains, which after many tests and a biopsy, signaled the presence of Burkitt's lymphoma. The condition is typified by swollen lymph nodes, often starting in the abdominal region, and the cancer can spread to bone marrow and spinal fluid. Not only was her health in danger, but that of her unborn child was also threatened.

The woman's husband first prayed for the intercession Pope John Paul II, who was then only recently buried in the crypt of St. Peter's. It wasn't long before the Holy Father appeared to the woman's husband in a dream. The spouse described to Tornielli what he saw that night, "He had a serious face. He said to me, 'I can't do anything, you must pray to this other priest...' He showed me the image of a thin, tall, lean priest. I didn't recognize him; I didn't know who he might be."

Several days passed before he, "by chance," came across a picture of Pope Pius XII in a magazine and recognized him as the man John Paul II had shown him in the dream.

The man wasted no time in bombarding Pius XII with prayers for his wife's healing and following her very first treatments she was declared free of the cancer, the tumor had disappeared. In fact, she was cured so quickly that her doctors pondered the notion that they may have originally misdiagnosed the pathology.

The tests and charts were reconsulted and the initial diagnosis was confirmed.

In the absence of the tumor, she had her baby and returned to work. After some time had gone by, she decided to contact the Vatican regarding her experience.

A local news source, the Sorrento & Dintorni, ran an article on Sunday offering a basic story of the possible miracle and the diocesan response to it. According to their report, a Tribunal has been organized by Archbishop Felice Cece of Sorrento-Castellammare to determine the nature of the occurrence and whether it will move on to the Vatican.

According to Tornielli, if they decide positively, the case will be sent on to Congregation for the Causes of Saints for investigation by a team of doctors to declare whether the event was explicable by natural means. If there is no explanation found for the healing, theologians from the Congregation will debate the issue. Only with their "go-ahead" can a dossier subsequently reach the hands of Pope Benedict XVI for official recognition.

Cardinal Jose Saraiva Martins, Prefect Emeritus of the Congregation for the Causes of Saints, told CNA on Monday that there is no telling how much time the entire process might take.

He also mentioned that if a case arrives to the Congregation for the Causes of Saints it is examined in chronological order based on the date of arrival and there are thousands of cases pending review.

However, he added, "exceptions might be made for Popes, etc."

There was no mention in Tornielli's report of where the lymphoma had manifested itself in the woman's body. According to the National Institute of Health, Burkitt's lymphoma is treatable and more than half of those diagnosed with the cancer are cured with intensive chemotherapy.