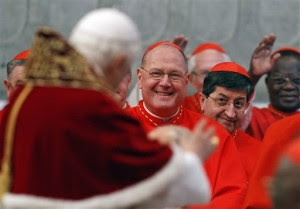 In the presence of 22 cardinals who were elevated yesterday, Pope Benedict XVI said that the Catholic Church only exists for the purpose of bringing people to Jesus and not for her own sake.

“The Church does not exist for her own sake, she is not the point of arrival, but she has to point upwards, beyond herself, to the realms above,” he said Feb. 19 to a packed St. Peter’s Basilica.

“The Church is truly herself to the extent that she allows the Other, with a capital ‘O,’ to shine through her – the One from whom she comes and to whom she leads.”

The Pope made his remarks in his homily for the Mass of the Solemnity of the Chair of St. Peter.

Dwelling upon the Gospel passage in which Peter proclaims Jesus to be “the Christ, the Son of the living God,” the Pope explored the significance of Christ’s response that Peter would be “the rock” upon which the Church was built.

The Pope explained how the old covenant between God and the Jewish people was first made with Abraham, of whom the Prophet Isaiah writes, “look to the rock from which you were hewn ... look to Abraham your father.”

Therefore, just as Abraham “the father of believers” is seen as “the rock that supports creation,” so too is Peter the basis for a new covenant. He is “the rock that is to prevail against the destructive forces of evil.”

The Pope then turned his gaze towards Bernini’s 17th-century bronze sculpture, the Chair of Peter, which dominates the apse of St. Peter’s Basilica.

He described it as an “enormous bronze throne that seems to hover in mid air, but in reality is supported by the four statues of the great Fathers of the Church from East and West.” Above it, he noted, are “triumphant angles suspended in the air” and the “glory of the Holy Spirit” depicted in the oval window above. Given today’s feast, the sculpture was adorned with 144 burning candles.

Pope Benedict proposed that the statue “represents a vision of the essence of the Church and the place within the Church of the Petrine Magisterium.”

The Church “is like a window, the place where God draws near to us, where he comes towards our world,” where God “reaches” us and where we “set off” towards him, the Pope explained.

The Church “has the task of opening up, beyond itself, a world which tends to become enclosed within itself, the task of bringing to the world the light that comes from above, without which it would be uninhabitable.”

Inside the magnificent bronze throne is a wooden chair which was thought for many centuries to have belonged to St. Peter himself but was later discovered to be a 9th century gift to the Pope from the Holy Roman Emperor, Charles the Bald.

“Saint Peter’s chair, we could say, is the throne of truth which takes its origin from Christ’s commission after the confession at Caesarea Philippi,” said Pope Benedict.

He also described it as a visible reminder of the famous expression of the early Church Father, Saint Ignatius of Antioch, who described the Church of Rome as “she that ‘presides in charity’.”

“In truth, presiding in faith is inseparably linked to presiding in love. Faith without love would no longer be an authentic Christian faith,” he said.

To “preside in charity,” the Pope taught, “is to draw men and women into a Eucharistic embrace – the embrace of Christ – which surpasses every barrier and every division, creating communion from all manner of differences.”

Pope Benedict also reflected on the importance of Sacred Tradition and Sacred Scripture for the Petrine ministry. It is Sacred Scripture, interpreted with the authority of the Catholic Church and “in the light” of the Church Fathers, which sheds “light upon the Church’s journey through time, providing her with a stable foundation amid the vicissitudes of history,” he said.

Therefore, he concluded, by considering the Altar of the Chair “in its entirety” we can see “twofold movement” of “ascending and descending” which depicts “the reciprocity between faith and love.”

“Whoever believes in Jesus Christ and enters into the dynamic of love that finds its source in the Eucharist,” he stated, “discovers true joy and becomes capable in turn of living according to the logic of this gift.”

“True faith is illumined by love and leads towards love,” just as “the altar of the Chair points upwards towards the luminous window, the glory of the Holy Spirit, which constitutes the true focus for the pilgrim’s gaze as he crosses the threshold of the Vatican Basilica.”

Pope Benedict later returned to similar reflections after Mass as he addressed pilgrims in St. Peter’s Square for the Sunday Angelus address, which he delivered from the window of his apartment.

“The Chair of St. Peter,” he told them, “is a symbol of the special mission of Peter and his successors to shepherd the flock of Christ, holding it together in faith and charity.”

Before praying the midday Marian prayer, he entrusted the new cardinals “to the maternal protection of Mary Most Holy, asking that she always assist them in their service to the Church and sustain them in any trials they may face.”
Posted by Padre Steve at 12:01 AM