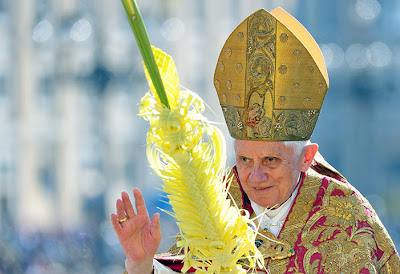 Christians should welcome Jesus by laying down their lives for him in the same way the people of Jerusalem once laid down their coats and palm branches, Pope Benedict XVI said in his Palm Sunday homily.

“Before Christ, we must spread out our lives, ourselves, in an attitude of gratitude and adoration,” he said April 1.

The Pope presided at Palm Sunday Mass in St. Peter’s Square. Tens of thousands of pilgrims joined him beneath a cloudy Roman sky to mark the beginning of Holy Week. The ceremonies opened with the traditional procession of cardinals carrying braided palms, followed by the Pope himself.

The Pope told the open-air congregation that the next seven days should call forth two sentiments: praise and thanksgiving. This is because “in this Holy Week the Lord Jesus will renew the greatest gift we could possibly imagine: he will give us his life, his body and his blood, his love.”

“But we must respond worthily to so great a gift” he said. Christians must respond “with the gift of ourselves, our time, our prayer, our entering into a profound communion of love with Christ who suffered, died and rose for us.”

The Pope explained why the “great multitude” who accompanied Christ’s arrival into Jerusalem on that first Palm Sunday reacted in the way they did.

Jesus, he said, arrived in Jerusalem from Bethphage and the Mount of Olives which was “the route by which the Messiah was supposed to come.” The crowd’s sense of expectation was raised further when Christ paused near Jericho to heal the blind beggar Bartimaeus, who acclaimed him as the “Son of David”.

“And so it was that, after this miraculous sign, accompanied by the cry ‘Son of David,’ a tremor of Messianic hope spread through the crowd, causing many of them to ask: this Jesus, going ahead of us towards Jerusalem, could he be the Messiah, the new David?”

Thus when Jesus reached Jerusalem the crowd tore branches from the trees and began to shout passages from Psalm 118. These “ancient pilgrim blessings” took on the character of messianic proclamation:

“Hosanna! Blessed is he who comes in the name of the Lord! Blessed is the kingdom of our father David that is coming! Hosanna in the highest!” the Pope summarized.

The Pope said this festive acclamation, which is recorded by all four Gospels, is “a cry of blessing, a hymn of exultation” which “expresses the unanimous conviction that, in Jesus, God has visited his people and the longed-for Messiah has finally come.”

In the person of Jesus Christ the cheering crowds saw the fulfillment of the ancient promise, given by God to Abraham, that “by you all the families of the earth shall bless themselves.”

“Thus, in the light of Christ, humanity sees itself profoundly united and, as it were, enfolded within the cloak of divine blessing, a blessing that permeates, sustains, redeems and sanctifies all things,” said Pope Benedict.

The “first great message” of Palm Sunday is an invitation to adopt a proper outlook on humanity and its different cultures and civilizations.

“The look that the believer receives from Christ is a look of blessing,” he said. It is a “wise and loving look, capable of grasping the world’s beauty and having compassion on its fragility.”

Quickly, however, the excitement of the Jerusalem crowd turned to disappointment as Jesus did not fit their own idea of how “the long-awaited King promised by the prophets should act.” And so, only a few days later, “instead of acclaiming Jesus, the Jerusalem crowd will cry out to Pilate: Crucify him!”

The Pope said that this question of Jesus’ identity is at the heart of today’s feast.

“We are called to follow a Messiah who promises us, not a facile earthly happiness, but the happiness of heaven, divine beatitude.”

Pope Benedict urged pilgrims, and particularly the young people present for today’s World Youth Day, to make the decision to “say yes to the Lord and to follow him all the way, the decision to make his Passover, his death and resurrection, the very focus of your Christian lives.”

He promised them that this decision is one that leads to “true joy.”

At the conclusion of Mass the Pope prayed the traditional midday Angelus with the gathered pilgrims and wished them well for the next seven days.

“This Holy Week, may we be moved again by Christ’s passion and death, put our sins behind us and, with God’s grace, choose a life of love and service to our brethren.”

As the dark clouds above St. Peter's Square turned to sunshine, he then made his way around St. Peter’s Square by Popemobile and blessed the cheering crowds as he went.
Posted by Padre Steve at 7:19 PM