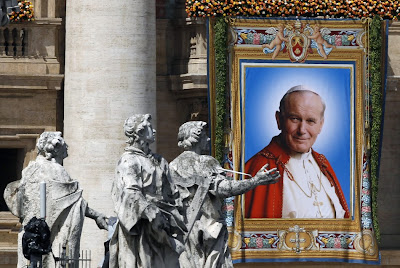 The retired prefect of the Congregation for Bishops says Blessed John Paul II will likely be canonized this year or next.
Cardinal Giovanni Battista Re offered this prediction during a presentation this week of "Il Papa e il Poeta" (The Pope and the Poet), written by Vatican expert Mimmo Muol.
"If it's not this year it will be next," said the cardinal, explaining that as more than one miracle has been attributed to the Polish Pontiff's intercession, "surely there is at least a valid one for his canonization."
Experts of the Congregation for Saints' Causes are reviewing the alleged miracles.
"The time [for the process] can be very brief," said the cardinal, who said the congregation was studying three or four miracles "to evaluate the most solid one."
"The cures are evaluated by a committee of seven doctors, members of a rather exacting internal scientific body, who have the task of examining every detail," Cardinal Re explained.
The former Vatican official classified the doctors as "rigid and meticulous," saying that they would not consider a healing miraculous if an illness was cured with therapies that in similar cases were effective.
"The seven doctors of the committee must be in agreement that it is an inexplicable case," he said, "from the human and scientific point of view."
Posted by Padre Steve at 9:18 AM