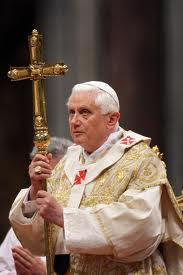 The following comes from CNA:


Pope Benedict XVI on Sunday said that the Magi’s visit to the Christ Child commemorated at the Feast of the Epiphany shows that Jesus Christ is “the light of the world that guides the path of all peoples.”

“The faith of Mary becomes the first fruits and the model of the faith of the Church, the People of the New Covenant," the Pope told the faithful gathered in St. Peter’s Square Jan. 6. “But this people, from the beginning, is universal; and we see this today in the figure of the Magi, who come to Bethlehem following the light of a star and the indications of the Sacred Scriptures.”

He said that Christmas shows the faith of the Virgin Mary, of Joseph and of the shepherds, while Epiphany shows “the faith of the Magi” who came from the East to adore the King of the Jews.

Pope Benedict explained that the Virgin Mary represents the “branch” of Israel and the remnant “foretold by the prophets, from which the Messiah will spring forth.”

In contrast, the Magi represent the people, “the civilizations, the cultures, the religions” that are “on the path to God, in search of his reign of peace, of justice, of truth, and of liberty.”

Mary embodies the “nucleus of Israel,” the people who “know and have faith in that God that was revealed to the Patriarchs.” Her faith is like that of Abraham, because it is “the new beginning of the same promise” that is fulfilled in Jesus Christ.

The Pope added: “the light of Christ is so clear and strong that it makes the language of the cosmos and of the Scriptures intelligible, so that all those who, like the Magi, are open to the truth can recognize it and join in contemplating the Savior of the world.”

In English, he greeted pilgrims including the boys of the Palestrina Choir of Saint Mary’s Pro-Cathedral in Dublin. They had sung at the Sunday Mass of the Epiphany at St. Peter’s Basilica.

Pope Benedict celebrated that Mass, during which he ordained three priests as bishops: Angelo Vincenzo Zani, who is named secretary of the Congregation for Catholic Education; Fortunatus Nwachukwu, who is named the apostolic nuncio to Nicaragua; Georg Ganswein, the nominated Prefect of the Papal Household; and Nicholas Henry Marie Denis Thevenin, the nominated apostolic nuncio to Guatemala.

The Pope asked the faithful to pray for the new bishops and their respective ministries.

“May the new bishops be faithful successors of the Apostles, always bearing witness to Christ, who today reveals the face of God to the nations. May the Lord bless all of you and grant you his peace!” the Pope prayed.
Posted by Padre Steve at 1:53 PM