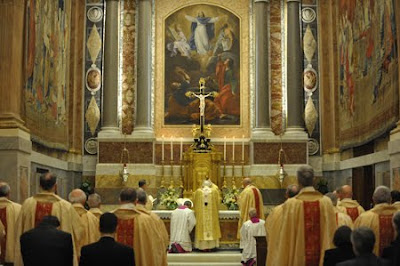 Pope Benedict XVI told thousands gathered in St. Peter's square Jan. 27 that marking Sunday as a day of rest and engaging in the liturgy can teach us to listen to the voice of God.

“Before we can speak of God and with God, we need to listen, and the liturgy of the Church is the 'school' of this listening to the Lord who speaks to us,” he said during his weekly Angelus address.

Exploring the day's reading from the Gospel of Luke, the Pope recounted how Jesus went to the synagogue in Nazareth on the Sabbath.

“As a true believer, the Lord does not avoid the weekly liturgical rhythm and joins the assembly of his fellow citizens in prayer and in listening to the Scriptures.”

This passage from scripture, Pope Benedict said, “makes us think about our way of life on Sunday as a day of rest and for the family.”

Sunday, he noted, is the “first day to devote to the Lord by participating in the Eucharist in which we're nourished by the Body and Blood of Chirst and his Word of life.”

“In our scattered and distracted era, this Gospel invites us to ask ourselves about our ability to listen, ” he emphasized.

“Every moment can be a 'today' moment for our conversion and become a day of salvation because salvation is a story that continues for the Church and for every disciple of Christ,” he said, adding that the “the Christian meaning of 'carpe diem' is to seize the day in which God is calling you to give you salvation.”

During his remarks on Sunday, the pontiff also recognized International Holocaust Remembrance Day, created by the United Nations in memory of the Holocaust victims of Nazism.

“It must be a constant reminder to all so that the horrors of the past, which exceeds all forms of hatred and racism, are not repeated,” he said, as well as a reminder “to promote respect and dignity of the the human person.”

Pope Benedict also noted that this Sunday “marks a special day of intercession” for peace in Holy Land. “I thank those who promote it in many parts of the world and I greet in particular those present here,” he said.

During the angelus a young boy and girl freed two doves, as symbols of peace, from the window of his Apostolic Palace after reading a message of Acr di Roma, an Italian lay association with over half a million members.

The Boys of the Catholic diocese of Rome, who celebrate annually a “Caravan of Peace” at the end of January, were also at St. Peter's Square.

On Jan. 27 this year, the Church also celebrates the 60th World Day of Leprosy.

“I express my closeness to those who suffer from this disease and encourage researchers, health professionals and volunteers, particularly those who are part of Catholic organizations and the Association of Friends of Raoul Follereau,” the Pope said.

He also invoked the intercession of St. Damien de Veuster, “who gave his life” for those afflicted with the disease, as well as St. Marianne Cope, who was canonized in Rome in October of last year. Both worked with leprosy sufferers in a colony in Hawaii in the 19th century.