Pope Benedict: I can 'almost physically' feel prayers and love 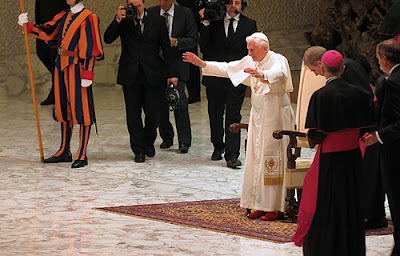 Two days after saying he will resign, Pope Benedict XVI said that he has been able to feel, “almost physically,” the prayers and love that have been poured out for him.

“I have felt, almost physically, your prayers in these days which are not easy for me, the strength which the love of the Church and your prayers brings to me,” he said at the beginning of his weekly general audience.

“Continue to pray for me and for the future Pope, the Lord will guide us!" he told the thousands of pilgrims.

The outpouring of support for Pope Benedict was evident from the moment he stepped onto the stage in Paul VI Hall. He was met with sustained applause when he began his remarks and had to pause until it subsided.

“Thank you for your kindness,” he responded as he resumed.

“I decided to resign from the ministry that the Lord had entrusted me on April 19, 2005. I did this in full freedom” the Pope stressed, adding that he made the decision “for the good of the Church after having prayed at length and examined my conscience before God, well aware of the gravity of this act.”
The Pope reiterated his official statement of resignation by saying that he was “also well aware that I was no longer able to fulfill the Petrine ministry with that strength that it demands.”

“What sustains and illuminates me is the certainty that the Church belongs to Christ whose care and guidance will never be lacking.

“I thank you all for the love and prayer with which you have accompanied me.”

Pope Benedict XVI will resign his office as the Successor of Peter on Feb. 28 at 8:00 p.m., the time at which his workday usually ends.

Following his resignation, the College of Cardinals will hold a conclave to decide who the next Pope will be.
Posted by Padre Steve at 3:00 PM