Pope Benedict: “The time of testing is here, let us focus on God again” 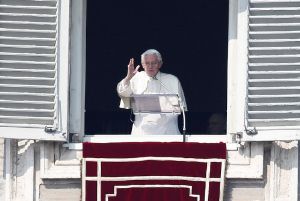 The following comes from the Vatican Insider site:

"The time of testing is here. We must not use God for our own ends.” Resignation is a testimony of faith. “Don’t be afraid” “to fight the evil spirit,” what is important is that we do it alongside Christ the Victor,” the Pope said during today’s Angelus before a crowd of 50 thousand faithful, urging them to turn to “the Mother Mary.” “Let us trust in the intercession of the Virgin Mary in this time of testing, “ he added. “Through her we will feel the powerful presence of his divine Son, so we may ward off temptation with the Word of Christ and place God at the centre of our lives.” We must reject the false images of the Messiah as Jesus did when faced with the temptations “the Temptor presented him with,” the most serious of which is “using God for one’s own ends,” Benedict XVI said during the course of the Angelus prayer.

“When he began his public ministry – the Pope remarked – Jesus had to unmask and dismiss the Temptor’s false portrayal of the Messiah. But these temptations – he added – are also a false portrayal of man, which threaten our conscience, disguised as proposals that seem convenient, efficient and even good.”

Then came an even stronger statement: “The Temptor is devious: he does not push us towards evil directly, but towards a false good, making us believe that the real things that matter are power and whatever satisfies our primary needs,” the Pope said speaking about the temptations the Devil presented Jesus with. “ Those who do not know Benedict XVI and the laws of the Catholic Church that well were left rather confused. But as one gets to know his personality better and becomes more familiar with Canonic law, one is better able to understand the Pope’s decision to step down from the papacy,” Vatican spokesman, Fr. Federico Lombardi, said, answering some questions on Catholic television programme “A Sua Immagine”(“In His Image”) on Italian TV station Rai 1.

Fr. Lombardi said that Benedict XVI’s was “a responsible act of government that was taken for the good of the Church.” Tens of thousands of faithful gathered in St. Peter’s Square to attend Benedict XVI’s second-to-last Angelus before he formally resigns on 28 February. Via Conciliazione in Rome has been blocked off since this morning, with a strong police presence to monitor the entire surrounding area. It was estimated there were over a hundred thousand faithful at the Angelus around midday. Rome’s mayor, Gianni Alemanno was also present. There was a constant flow of faithful entering the square and numerous faithful and tourists queued to get into St. Peter’s Basilica. Traffic police and normal police guarded the area and hundreds of television cameras representing TV stations from all around the world were pointed at the Holy See.

Faithful will pronounce a special prayer for Beneddict XVI in churches across all of Rome’s dioceses. The prayer session was promoted by Cardinal Vicar Agostino Vallini and is a chance for the dioceses of Rome to thank their bishop. The director of the Liturgical Office of the Vicariate of Rome, Fr. Giuseppe Midili, explained the meaning of this initiative to Vatican Radio: “The initiative was introduced by the Cardinal Vicar and auxiliary bishops to give faithful a chance to express their support, affection and above all communion through prayer to their bishop. So we thought of putting together one single text that can be read out in all Eucharistic celebrations taking place in churches throughout the diocese this Sunday, to communicate a moment of communion.” “It is important we show our closeness to Benedict XVI in this delicate and unusual moment,” as “it is a wish that comes from the heart: he certainly stood as an example and a model for all of us; an example of the ability to face up to situations that form part of our daily lives, of the ability to look critically at one’s own life and to respond to one’s own vocation in a full and conscious manner.”

A difficult legacy, marked by a divided Vatican and the opportunity that lies ahead for Benedict XVI’s potentially international successor. These are the two points which international press has focused on today in their analysis of Benedict XVI’s resignation, underlining the challenges that lie ahead for the new Pope (from recovering credibility to the ordination of women).

“Last Wednesday’s traditional rite of ashes marked the beginning of Lent, a time of conversion and penitence in preparation for Easter.” “The Church – Benedict XVI stressed – which is our mother and teacher, calls all of its members to renew their spirit and focus their attention on God once again , renouncing pride and selfishness, in order to live in love.” “In this Year of Faith – the Pope said – Lent is the ideal time to rediscover our faith in God as the basis of our lives and the life of the Church. This always means putting up a fight, a spiritual battle, because the evil spirit is naturally opposed to our sanctification and tries to make us deviate from God’s path.”
Posted by Padre Steve at 9:59 AM