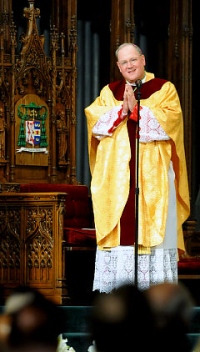 One of the many happy occurrences of this radiant Easter season in the Church is meeting those former “candidates” and “catechumens” who entered into full communion with the Church at Easter Eve.

They bring an exuberance, a joy, a devotion that I at times find lacking in lifelong Catholics, myself included.

In addition, they easily speak about Catholic doctrines, practices, and traditions that they find “awesome,” which, once again, sadly, for us “cradle Catholics,” may have lost their luster.

Let me mention a few:

For one, they love Sunday Mass and receiving the Eucharist.  For instance, Easter Sunday morning, at 10:15 Mass at Saint Patrick’s, I saw one of our brand new Catholics, who had just been baptized, confirmed, and received his first Holy Communion the night before.

“You didn’t have to come back this morning!” I teased him.  “You went to Mass last night!  You could have slept-in.”

Two, believe it or not, they enjoy the Sacrament of Penance, and see the need for it.  At a time when a lot of us folks, Catholic from birth, have quit this powerful sacrament, our new Catholics love it.

Three, they rejoice in the Holy Father, not just in Pope Francis – although they sure love him – but in the papacy itself.  The tradition, the living teaching authority of the Church personified in the Pope, gives them confidence, they tell me.  Good to hear…

Four, they appreciate Mary and the saints.  One of our new Catholics told me that the most powerful moment of the Easter Vigil came during the chanting of the Litany of the Saints, when it dawned on her that she was joining a spiritual family with older brothers and sisters – the saints – and a mother – Mary – in heaven.

Finally, they speak eloquently about the power of conversion.  They have left their “old selves behind:” they are a “new creation.”  They have accepted the invitation of Jesus toconversion.

Sometimes that means the cross. So, a number of years ago, a nurse who had become Catholic at Easter saw me a month or so later.

“Well, I know what Jesus meant when He said His followers must take up His cross,” she remarked to me at the coffee and donuts after Mass.

When I asked her to explain, she went on, “In my work as a nurse, I’ve a time-or-two had to assist at an abortion.  I knew that, after I converted, that would have to go.  So, this week, when I was assigned to help at one, I told them I could not.  My supervisor told me to give up hopes of any raise or promotion…”

Can they ever teach us a lot about our “old faith”: the appeal of the Eucharist, the power of confession, the gift of the Holy Father, the solidarity with our blessed Mother and the saints, the call to conversion…

Welcome, new family members!
Posted by Padre Steve at 9:00 AM