Pope Francis: A Christian Should Live in Perpetual Peace 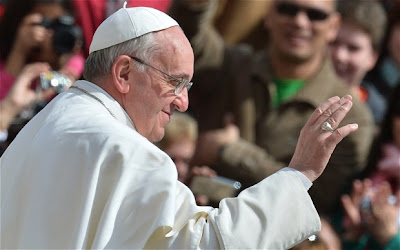 Francis celebrated his usual morning Mass today at Domus Sanctae Marthae, drawing from the Gospel passage from Luke to reflect on peace, which he said is a gift that "is not sold and we do not buy."
Drawing from the first reading, he said that the disciples who were witnesses of the lame man's healing and now see Jesus, “are a bit out of themselves, but not because of some mental illness: outside themselves because of their awe."
But what is this awe? “It is something," said the Holy Father, “that drives us out of ourselves, for joy: this is great, it is very great. This is not mere enthusiasm: even fans in a stadium are enthusiastic when their team wins, right? No, this is not some enthusiasm, it is something more profound: it is the wonder that comes when we find ourselves with Jesus."
This astonishment, the Holy Father explained, is the beginning “of the habitual state of the Christian." Certainly, he noted, we cannot live forever in wonder, but this is condition is the beginning which allows a “mark to be left on the soul and spiritual consolation." Actually, the condition of being a Christian should be one of spiritual consolation, notwithstanding problems, pains, sickness.
"The last step of consolation," the Pontiff said, “is peace: one begins with awe, and the minor tone of this wonder, of this consolation, is peace." The Christian, even in the most painful trials, never loses “the peace and the presence of Jesus” and with “a little courage," we are able to say to the Lord: “Lord, give me this grace that is the sign of the encounter with you: spiritual consolation”; and, above all, he emphasized, “never lose peace." We look to the Lord, who “suffered so upon the Cross, but he never lost peace. Peace, this peace, is not our own: it is not sold and we do not buy it." It is a gift of God for which we must beg.
Peace is like “the final step of this spiritual consolation, which begins with a joyful wonder." Wherefore, we must not “trick ourselves with our or others' fantasies, which lead us to believe that these fantasies are reality." In truth, it is more Christian “to believe that reality may not be so pretty."
The Pope ended by asking for the grace of spiritual consolation and of peace, which “begins with this joyful wonder in the encounter with Jesus Christ."
The first reading for today's Mass is Acts 3:11-26, which begins: As the crippled man who had been cured clung to Peter and John, all the people hurried in amazement toward them in the portico called “Solomon’s Portico.” When Peter saw this, he addressed the people, “You children of Israel, why are you amazed at this, and why do you look so intently at us as if we had made him walk by our own power or piety?
The Gospel for today's Mass is Luke 24:35-48, which includes: While they were still speaking about this, he stood in their midst and said to them, “Peace be with you.” But they were startled and terrified and thought that they were seeing a ghost. Then he said to them, “Why are you troubled? And why do questions arise in your hearts? Look at my hands and my feet, that it is I myself. Touch me and see, because a ghost does not have flesh and bones as you can see I have.” And as he said this, he showed them his hands and his feet. While they were still incredulous for joy and were amazed, he asked them, “Have you anything here to eat?” They gave him a piece of baked fish; he took it and ate it in front of them.