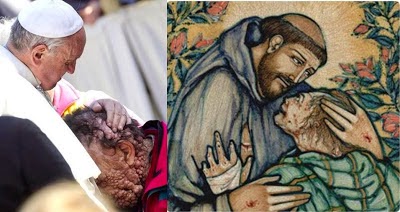 Or you might find this story, somewhat less recent. The original story dates from the 13th century, and it's about a different Francis:

The saint was close to the end of his life, unable to walk and suffering from an eye disease and the stigmata. As he was brought through a region, some people from a nearby town came to ask for his help with their parish priest. They had discovered that their priest was involved in a scandalous relationship with a woman of that town. The saint was brought to the town and placed before the priest in front of everyone. They thought that the saint would upbraid the fallen priest. St. Francis instead fell to his knees, took the priest’s hands into his own stigmatized hands, kissed them and said, “All I know and all I want to know is that these hands give me Jesus.” It was said that the priest was converted.

You may wish that the Pope would do something different, besides imitating a saint. You may long to see him turn his back on the same people you turn your back on, come thundering down on the sinners you find especially revolting. But this is what he's doing instead: kissing hands. He is acknowledging that we are here to bring Christ to each other.

We hear that Pope Francis is "sending the wrong message" when he consorts with sinners like the dissenting activist priest. But it's the same message God sent to Adam when He called to him in the garden. It's the same message that Jesus was sending when He told the story of the prodigal son. When man sins, God calls him, begs him to return. The hands with the stigmata reach out for the hands that killed, that tortured, that squandered, that betrayed.

Read the rest here.
Posted by Padre Steve at 2:00 PM