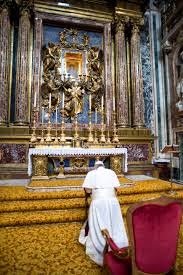 (Vatican Radio) Those who study the mystery of God are brought to their knees because God reveals more to a humble heart. Those were the Pope’s words during his Homily at Mass Tuesday morning at the Casa Santa Martha.

The eyes of the poor, said Pope Francis, are most likely to see Christ and, through him, to see the face of God. Others who claim to fathom this mystery with the resources of intelligence must first get down on their "knees", in an act of humility , otherwise "they will not understand anything."

During his Homily the Pope focused on the Gospel of St Luke from the morning’s liturgy, reflecting on Christ’s relationship to the Father, both praising and thanking him.
"He makes us know the Father, introduces us to this inner life that He has. And tp whom does the Father reveal this? To whom does he give this grace? 'I praise you, Father, Lord of heaven and earth, because you have hidden these things from the wise and learned, and revealed them to little ones'. Only those whose hearts are like the young are capable of receiving this revelation, the humble of heart, the meek, who feel the need to pray, to open up to God, who feel poor; only he who goes forward with the first Beatitude: the poor in spirit. " Therefore, poverty is a privileged gift that opens the door to the mystery of God. A gift that sometimes, noted Pope Francis, that may be lacking in those dedicated to a life of study.
"Many may know the science, theology well, so many! But if they do not practice this theology on their knees, humbly, like children, they will not understand anything. It will tell them many things, but they will not understand anything. Only with this poverty is one capable of receiving the revelation that the Father gives through Jesus, through Jesus. Jesus is, not like a captain, an army general, a powerful ruler, no, no. He is like a bud. Just like we heard in the First Reading: 'On that day, a shoot shall sprout from the stump of Jesse'. He is a bud that is humble, mild, and came to the humble, and to the meek, to bring salvation to the sick, the poor, the oppressed.” Pope Francis continued by saying that the mystery Jesus is that of humbling oneself. It is a mystery that  "brings salvation to the poor, brings comfort to those who are stricken by many diseases, sins and difficult situations." "Out of this context”, concluded Pope Francis you cannot understand the mystery of Jesus":
"We ask the Lord, in this Advent season, to bring us nearer to his mystery and to do so the way that He wants us to do: the way of humility, the way of meekness, the way of poverty, the road where we feel sin. So that he can come to save us, to free us. May the Lord give us this grace.
Posted by Padre Steve at 11:32 AM