Saint of the day: Nicholas of Myra 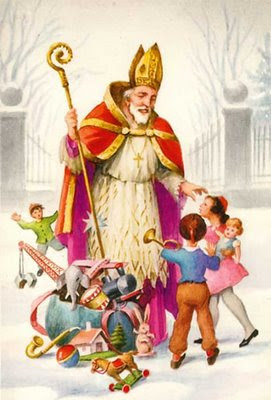 Today is the Feast of St. Nicholas! Here is the info from the Patron Saints Index:

Priest. Abbot. Bishop of Myra, Lycia (modern Turkey). Generous to the poor, and special protector of the innocent and wronged. Many stories grew up around him prior to his becoming associated with Santa Claus. Some examples

Upon hearing that a local man had fallen on such hard times that he was planning to sell his daughters into prostitution, Nicholas went by night to the house and threw three bags of gold in through the window, saving the girls from an evil life. These three bags, gold generously given in time of trouble, became the three golden balls that indicate a pawn broker’s shop.

He raised to life three young boys who had been murdered and pickled in a barrel of brine to hide the crime. These stories led to his patronage of children in general, and of barrel-makers besides.

Induced some thieves to return their plunder. This explains his protection against theft and robbery, and his patronage of them - he’s not helping them steal, but to repent and change. In the past, thieves have been known as Saint Nicholas’ clerks or Knights of Saint Nicholas.

During a voyage to the Holy Lands, a fierce storm blew up, threatening the ship. He prayed about it, and the storm calmed - hence the patronage of sailors and those like dockworkers who work on the sea
Posted by Padre Steve at 5:00 AM