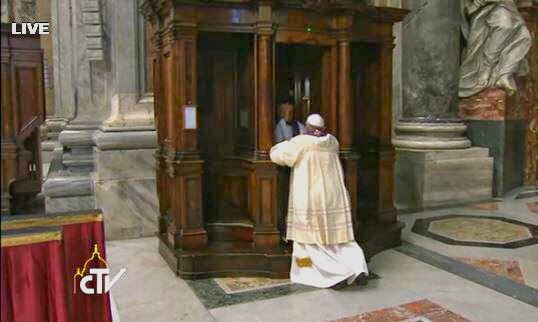 The following comes from Catholic Exchange:

The Lord declares in Isaiah 43:25:
I, I am He who blots out your transgressions for my own sake, and I will not remember your sins.
Psalm 103:2-3 adds:
Bless the Lord, O my soul, and forget not all his benefits, who forgives all your iniquity, who heals all your diseases…
Many will use these verses against the idea of confession to a priest. God forgiving sins, they will claim, precludes the possibility of there being a priest who forgives sins. Further, Hebrews 3:1 and 7:22-27 tell us Jesus is, “the… high priest of our confession” and that there are not “many priests,” but one in the New Testament—Jesus Christ. Moreover, if Jesus is the “one mediator between God and men” (I Tim. 2:5), how can Catholics reasonably claim priests act in the role of mediator in the Sacrament of Confession?
BEGINNING WITH THE OLD
The Catholic Church acknowledges what Scripture unequivocally declares: it is God who forgives our sins. But that is not the end of the story. Leviticus 19:20-22 is equally unequivocal:
If a man lies carnally with a woman… they shall not be put to death… But he shall bring a guilt offering for himself to the Lord… And the priest shall make atonement for him with the ram of the guilt offering before the Lord for his sin which he has committed; and the sin which he has committed shall be forgiven him.
Apparently, a priest being used as God’s instrument of forgiveness did not somehow take away from the fact that it was God who did the forgiving. God was the first cause of the forgiveness; the priest was the secondary, or instrumental cause. Thus, God being the forgiver of sins in Isaiah 43:25 and Psalm 103:3 in no way eliminates the possibility of there being a ministerial priesthood established by God to communicate his forgiveness.
OUT WITH THE OLD
Many Protestants will concede the point of priests acting as mediators of forgiveness in the Old Testament. “However,” they will claim, “The people of God had priests in theOld Testament. Jesus is our only priest in the New Testament.” The question is: could it be that “our great God and Savior Jesus Christ” (Titus 2:13) did something similar to that which he did, as God, in the Old Testament? Could he have established a priesthood to mediate his forgiveness in the New Testament?
IN WITH THE NEW
Just as God empowered his priests to be instruments of forgiveness in the Old Testament, the God/man Jesus Christ delegated authority to his New Testament ministers to act as mediators of reconciliation as well. Jesus made this remarkably clear in John 20:21-23:
Jesus said to them again, “Peace be with you. As the Father has sent me, even so I send you.” And when he had said this, he breathed on them, and said to them, “Receive the Holy Spirit. If you forgive the sins of any, they are forgiven; if you retain the sins of any, they are retained.”
Having been raised from the dead, our Lord was here commissioning his apostles to carry on with his work just before he was to ascend to heaven. “As the Father has sent me, even so I send you.” What did the Father send Jesus to do? All Christians agree he sent Christ to be the one true mediator between God and men. As such, Christ was to infallibly proclaim the Gospel (cf. Luke 4:16-21), reign supreme as King of kings and Lord of lords (cf. Rev. 19:16); and especially, he was to redeem the world through the forgiveness of sins (cf. I Peter 2:21-25, Mark 2:5-10).
The New Testament makes very clear that Christ sent the apostles and their successors to carry on this same mission. To proclaim the gospel with the authority of Christ (cf.Matthew 28:18-20), to govern the Church in His stead (cf. Luke 22:29-30), and to sanctify her through the sacraments, especially the Eucharist (cf. John 6:54, I Cor. 11:24-29) and for our purpose here, Confession.
John 20:22-23 is nothing more than Jesus emphasizing one essential aspect of the priestly ministry of the apostles: To Forgive men’s sins in the person of Christ— “Whose sins you forgive, they are forgiven, whose sins you retain are retained.” Moreover, auricular confession is strongly implied here. The only way the apostles could either forgive or retain sins is by first hearing those sins confessed, and then making a judgment whether or not the penitent should be absolved.
Read the rest here.