The Apparition of St. Joseph in Cotignac, France 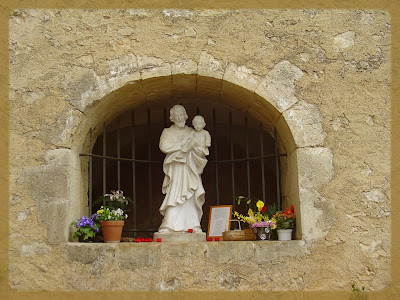 The following comes from the St. Joseph Sanctuary site:

It promised to be a hot day. A young shepherd of Cotignac, Gaspard Ricard aged 22 years, had herded his sheep to the east side of the Bessillon. At about 1 o'clock in the afternoon the heat was stifling. Very thirsty, he lay on the rocky ground when suddenly a tall man stood next to him and pointed to a rock saying : "Ie'u sie'u Jouse; enevo-lou e be'uras" that is to say " I am Joseph; lift it and you will drink".
The rock was heavy - it would take about eight men to move it, how could Gaspard move it? But the venerable old man, according to the accounts of the day, reiterated his instruction. The shepherd obeyed and, moving the rock, found fresh water beginning to flow. Immediately he drank eagerly. When he stood up, he found the man had gone. Without waiting he went and took the news to the village and the curious began to arrive. Three hours after the event, in a place known to have no water, an abundant source was flowing.

St. Joseph brought to light in the Church and in France. : "That's it! Nothing simpler, nothing poorer than this apparition?. like the Gospel", commented Mgr. Gilles Barthe, in his pastoral letter of 14th February 1971. Water is the sign, so essential in our faith, of our regeneration and of the new life risen for us in Christ's Easter. Here is brought to light St. Joseph's role as a powerful intercessor"

St Joseph united with the Virgin Mary in the eternal plan of Divine Providence, which God wants associated with his wife in the heart and prayers of Christians, especially in the life of families.

The facts are duly attested by abundant sources which have been well preserved. One thing which happened in the months following the apparition is remarkable: Once again, the Consuls of Cotignac as politicians and as responsible Christians believed in the apparition and soon made arrangements so that the pilgrimages could be coped with and at the same time giving due respect to the appropriate responsibilities and competence of the church officials in the spiritual domain (services, thanksgiving etc.).

Things happened fast. At the meeting of the Municipal Council on 25th July, St. Joseph's source was discussed, the water of which has many qualities and performs many works. As from all over the province people come to take water to bathe, drink and cure where there are sick or infirm. This was causing disorder. The construction of a Chapel was decided. A charity was formed to pay for it. Begun the 9th August it was completed the following October. Soon too small, in 1661 a much larger church was started in the style of the period. It is the same St. Joseph's Sanctuary, consecrated in 1663, that you can see today.

But at the time the big question was who, secular priests or religious order, was going to be in charge of St. Joseph's Chapel. The population of Cotignac and its elected representatives wanted the Oratorian fathers of Our Lady of Graces and the Bishop of Frejus finally agreed. So it was right up to the Revolution.

Extraordinary Signs : In 1662, in his written account of his visit, Father Allard of the Oratory spoke of the year 1661 :
"The fathers (of Our Lady of Graces) have assured me that there have been 52 processions between Easter and Pentecost, and that there were 6000 people within the octave of the latter feast. The waters of St. Joseph bring miracles. Since I returned, a man whom we know from Avignon, born lame, went to the spring and came back cured , having left his crutches there. Everyone drinks and carries away the water."
He adds that the fathers had constructed a 6 bedroom building at St. Joseph, and they are overwhelmed. They need reinforcements. The Pope Alexander VII gave his benediction to the Confraternity which soon established itself under the name of Confraternity of the Holy Family or Jesus Mary and Joseph.
All this shows the popularity achieved by the devoutness of St. Joseph. Since 1661 on his feast day the 19th March, huge crowds arrived. It was in that year that Louis XIV decreed that day to be a holiday. Soon the feast of St. Joseph was kept in all the French dioceses (which the Holy Father had been asking for the past 40 years) and especially in Provence. Churches appeared which were consecrated to St. Joseph and, in nearly all the others, an altar was dedicated to he whom the Church would in 1871 proclaim its universal protector. The St. Joseph source at the foot of the Sanctuary has never dried up, it is still visible lower down than the sanctuary on the side. Neither have the graces which it would be impossible to list say the Benedictine Sisters, who have made this their privileged abode since 1977 when they returned from Algeria. To all those who pray with faith, St. Joseph replies with a father's heart. He brings back the hearts of children to their parents, protects the unborn child, reconciles feuding brothers, and restores the will to live, say the Benedictines, who are often the confidants of graces obtained and these are often regarding material necessities: to live one must have food and a roof over ones head...
After his pilgrimage to Cotignac and the apparition of St. Joseph, Louis XIV could hardly do less than to consecrate France and himself to St. Joseph. (These good Christian dispositions hardly survived the death of his mother, Anne of Austria).
Posted by Padre Steve at 1:00 PM