Pope Pius V: The holy pope who lived on vegetable broth and crayfish 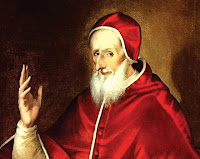 St Pius V, who excommunicated Queen Elizabeth, continued to live as a monk even after he became pope.

Pius V, pope from 1566 to 1572, was the kind of Counter Reformation pontiff dear to the hearts of Roman triumphalists. That he still freezes the blood of Protestants he would have regarded as a badge of honour.

Zealots, however, do not always apprehend the consequences of their actions. By excommunicating Queen Elizabeth in 1570, Pius V put paid to any chance that Catholicism might be tolerated in England. Even Philip II of Spain considered that the pope was mistaken in this matter.

Yet Pius V was certainly a holy man. Born in 1504 at Bosco, some 30 miles north of Genoa, Antonio Ghislieri came from an impoverished noble family. In boyhood he worked as a shepherd; at 14, he became a Dominican, adopting the name Michele.

After studying theology in Bologna and being ordained in Genoa, he taught theology in Pavia for 16 years. Appointed Inquisitor for Como and Bergamo, he made an impression with another hardliner, Cardinal Carafa. As Pope Paul IV (1555-59) Carafa made Michele Ghislieri a bishop (1556), a cardinal (1557) and “perpetual supreme Inquisitor” (1558).

Although Ghislieri’s severity raised some eyebrows he was elected pope in 1566 through the influence of Charles Borromeo, Archbishop of Milan.

As Pius V Ghislieri continued to live as a monk, wearing the coarse clothing of a friar under his papal robes and living mainly on vegetable broth and crayfish. He felt it his duty, moreover, to indulge in public exhibitions of piety, processing through the streets with head and feet bare.

Eager to make Rome a holy city in reality as well as in name he expelled prostitutes, banned bullfights and tried to restrict the use of taverns to visitors to the city. He also looked after the poor by distributing alms and food and by setting up interest-free loan banks.

In spiritual affairs Pius V fostered his own strong devotion to the Virgin Mary. He laboured to enforce the decrees of the Council of Trent, which he circulated abroad as far as Mexico, Goa and the Congo. To the same end he published the Roman Catechism (1566) and the revised Roman Breviary (1568).

The Roman Missal, issued in 1570, standardised the celebration of Mass. Any national and regional variations had to be warranted by an antiquity of at least 200 years.

Following the example of his mentor Paul IV Pius V continued to sharpen the powers of the Inquisition and eagerly persecuted anyone who showed the least deviation from orthodoxy. He also expelled Jews from the papal state, moderating his anti-Semitism only in favour of commercial advantage.

In 1571 Pius V achieved a triumph when the Spanish and Venetian coalition he had organised destroyed the Turkish fleet at the battle of Lepanto.
Posted by Padre Steve at 12:00 AM