"Sister Prema, whose name means love, is the new superior of the Sisters of Mother Teresa" 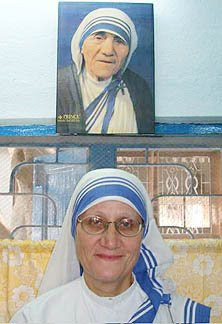 The Missionaries of Charity have a new leader. Sister Nirmala has decided to step down after 10 years and will retire to a more contemplative life and the sisters have elected their new leader. Let's pray for all of the sisters and especially for Sister Prema!

The following comes from the Roman Catholic Vocations site:
In Sanskrit “Prema means love,” love that is pure and holy, a name that befits the new superior general of the Missionaries of Charity, Brother Paul told AsiaNews. The 41-year-old British priest is a member of the male branch of the Missionaries of Charity, the religious congregation founded by Mother Teresa.
Sister Prema met the Blessed for the first time in 1980, in Berlin, after reading Something Beautiful for God, a book by BBC journalist Malcolm Muggeridge who wrote about his meeting with Mother Teresa in 1969 when he was making a documentary on the nun from Kolkata that would make her known worldwide.

“I know Sister Prema. She is a visionary, a deeply spiritual person with an implicit trust in God. She has a clear understanding of her mission, with the charism of the Missionaries of Charity implanted in her heart, to serve Jesus by serving the poorest of the poor,” said Brother Paul who has been posted for the past seven years in the Shanti Bhavan, or House of Peace, in Kolkata.

The general chapter of the Missionaries of Charity held in Dum Dum picked the German-born nun to replace Indian-born Sister Nirmala Joshi as the head of the congregation to reflect its international reach, which now includes some 4,500 nuns in 133 countries.

Mgr Lucas Sircar, archbishop of Kolkata, said that Sister Prema was elected on the first round of voting, getting more than two thirds of the votes cast by 163 delegates.

For Brother Paul the new superior general’s country of origin does not represent any change since “God looks not at nationalities, but at hearts.”

Sister Prema’s task now is “to guide the Missionaries of Charity towards the holiness of our Blessed Mother Teresa.”
Posted by Padre Steve at 5:55 AM