It is interesting to see the silence much of the "mainstream media" has given to controversial topics that have been steamrolled by the new administration. You can hear the crickets chirp as it relates to any real coverage of criticism of the left leaning "change" agenda. Where have all the journalists gone? Well, it is good to see that P.J. O'Rourke is paying attention. Read his very blunt review of the current administrations stem cell program. I found this at the Anchoress blogsite:

P.J. O'Rourke is a contributing editor to THE WEEKLY STANDARD. 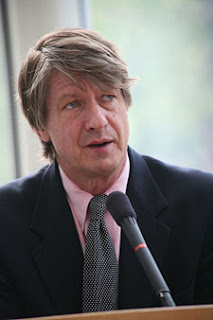 When a Democratic president goes from being wrong to being damn wrong is always an interesting moment: Bay of Pigs, Great Society, Jimmy Carter waking up on the morning after his inauguration, HillaryCare. Barack Obama condemned himself (and a number of human embryos to be determined at a later date) on March 9 when he signed an executive order reversing the Bush administration's restrictions on federal funding of stem cell research.

President Obama went to hell not with the stroke of a pen, but with the cluck of a tongue. His executive order was an error. His statement at the executive order signing ceremony was a mortal error: "In recent years, when it comes to stem cell research, rather than furthering discovery, our government has forced what I believe is a false choice between sound science and moral values."

A false choice is no choice at all--Tweedledee/Tweedledum, Chevy Suburban/GMC Yukon XL, Joe Biden/Triumph the Insult Comic Dog. Is there really no difference "between sound science and moral values"? Webster's Third New International Dictionary states that science is, definition one, "possession of knowledge as distinguished from ignorance or misunderstanding."

Let's look at the various things science has "known" in the past 3,000 years.

Lightning is the sneeze of Thor.

The periodic table consists of Earth, Wind, and Fire and a recording of "Got To Get You into My Life."

The world is flat with signs saying "Here Be Democrats" near the edges.

You can turn lead into gold without first selling your Citibank stock at a huge loss.

We're the center of the universe and the Sun revolves around us (and shines out of Uranus, Mr. President, if I may be allowed a moment of utter sophomoricism).

But, lest anyone think I'm not serious, let me quote with serious revulsion the following passages from the 11th edition of the Encyclopedia Britannica (1911)--that great compendium of all the knowledge science possessed, carefully distinguished from ignorance and misunderstanding, as of a hundred years ago:

[T]he negro would appear to stand on a lower evolutionary plane than the white man, and to be more closely related to the highest anthropoids.

Mentally the negro is inferior to the white.

The above are quoted--not out of context--from the article titled "Negro" written by Dr. Walter Francis Willcox, chief statistician of the U.S. Census Bureau and professor of social science and statistics at Cornell. I trust I've made my point.

Now let's look at the things morality has known. The Ten Commandments are holding up pretty well. I suppose the "graven image" bit could be considered culturally insensitive. But the moralists got nine out of ten--a lot better than the scientists are doing. (And, to digress, the Obama administration should take an extra look at the tenth commandment, "Thou shalt not covet," before going into nonkosher pork production with redistributive tax and spend policies.)

A false choice means there's no choosing. The president of the United States tells us that sound science and moral values are united, in bed together. As many a coed has been assured, "Let's just get naked under the covers, we don't have to make love." Or, as the president puts it, "Many thoughtful and decent people are conflicted about, or strongly oppose this research. And I understand their concerns, and I believe that we must respect their point of view."

Mr. President, sir, if this is your respect, I'd rather have your contempt or your waistline or something other than what you're giving me here. The more so because in the next sentence you say,

But after much discussion, debate and reflection, the proper course has become clear. The majority of Americans--from across the political spectrum, and of all backgrounds and beliefs--have come to a consensus that we should pursue this research.

Mr. President, you're lying. There is no consensus. And you are not only wrong about the relationship between facts and morals, you are wrong about the facts of democracy. In America we have a process called voting--I seem to remember you were once very interested in it. We the citizens determine whether and how to spend the proceeds of taxation, which we alone are empowered to impose upon ourselves through our elected representatives in Congress, not the White House. If you want to kill little, bitty babies, get Congress to pass a law to kill little, bitty babies, if you can. I'm not going to bother arguing with you about whether it's wrong. Surely you too gazed at the sonogram screen and saw a thumb-sized daughter tumbling in the womb, having the time of her life. And a short life it will be, in a Petri dish. But we've already established that you don't know wrong from right.

The question is not about federal funding for stem cell research, the question is are you a knave or a fool? I'm inclined to take the more charitable view. For one thing you have a foolish notion that science does not progress without the assistance of government.

Philosophy was once considered science. After Alexander the Great had accepted the surrender of Athens, he found Diogenes the Cynic living in a barrel.

"What can I do for you?" Alexander asked.

"Get out of my light," Diogenes said.

On the other hand, you, Mr. President, said that scientific progress "result from painstaking and costly research, from years of lonely trial and error, much of which never bears fruit, and from a government willing to support that work."

Thus it was that without King George's courtiers winding kite string for Ben Franklin and splitting firewood and flipping eye charts to advance his painstaking and costly research into electricity, stoves, and bifocals, Ben's years of lonely trial and error never would have borne fruit. To this day we would think the bright flash in a stormy summer sky is God having an allergy attack. We would heat our homes by burning piles of pithy sayings from Poor Richard's Almanac in the middle of the floor. And we would stare at our knitting through the bottoms of old Coke bottles.

We'd probably have telephones and light bulbs if President Rutherford B. Hayes (a Republican) had been willing to support the work of Alexander Graham Bell and Thomas Edison. As you say, Mr. President, "When government fails to make these investments, opportunities are missed." (Although the light bulbs would now have to be replaced by flickering, squiggly fluorescent devices anyway, to reverse global warming.)

Also, Mr. President, you make a piss poor argument in favor of embarking on what you yourself admit is an uncertain course of action. You say, "At this moment, the full promise of stem cell research remains unknown, and it should not be overstated." And you find it necessary to say, "I can also promise you that we will never undertake this research lightly."

As your reasons for this research--which we are to perform with heavy hearts--you name a few misty hopes: "to regenerate a severed spinal cord," "lift someone from a wheelchair," "spare a child from a lifetime of needles." Then you undercut yourself by introducing a whole new fear. "And we will ensure that our government never opens the door to the use of cloning for human reproduction. It is dangerous, profoundly wrong, and has no place in our society." Because cloning cells to make a human life is so much worse than cloning cells from a human life that's already been destroyed. Why, it's as dangerous, as profoundly wrong, and has as little place in our society as being pro-life.

Mr. President, any high school debate team could do better. Even debate teams from those terrible inner-city public high schools that your ideology demands that you champion no matter how little knowledge they provide. And I particularly enjoyed the part of your speech where you said that "we make decisions based on facts, not ideology."
Posted by Padre Steve at 9:05 AM