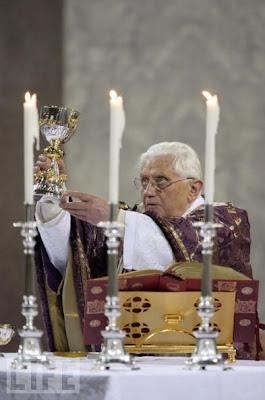 The Holy Father dedicated the General Audience on Wednesday in the Paul VI Hall to the significance of the Lenten season which begins today. He emphasized the importance of daily conversion for swimming "against the current" of a society that promotes a “superficial lifestyle” and “moral mediocrity.”
Lent, Pope Benedict observed, is an "acceptable and grace-filled time" in which we can better understand the words "repent and believe in the Gospel."
The call to conversion is one to take with "extraordinary seriousness" because it "reveals and denounces the easy superficiality that often characterizes our lives," Pope Benedict taught.
"Repentance means changing direction in the path of life," he said emphasizing that this is "not with a small adjustment, but with a true and personal reversal." It is going "against the current, where the 'current' is the superficial lifestyle... that often pulls at us, dominates us and makes us slaves of evil and, so, prisoners of moral mediocrity."
In our conversion, the Pope explained, we shoot for the "highest measure of the Christian life” as we put our trust in the "living and personal Gospel" of Jesus Christ.
"His person is the final goal and the deep meaning of repentance... he is the road by which all are called to walk in life, letting ourselves be illuminated by his light and sustained by his strength that moves our steps."
In this way, "it isn't a simple moral decision that rectifies our life's conduct, but a choice of faith that involves us entirely in the intimate communion with the living and concrete person of Jesus, noted Benedict XVI.
Repenting and believing the Gospel, the Holy Father elaborated, are expressions of the same reality and conversion, which "is the 'yes' of he who gives his own existence to the Gospel, responding freely to Christ who first offers himself to man as the way, truth and life, as it is He alone that frees and saves him."
This is the meaning of the first words with which Jesus preaches the Gospel, 'This is the time of fulfillment. The kingdom of God is at hand. Repent, and believe in the gospel,' the Pope added.
Pope Benedict also focused on how repentance and conversion are lifelong commitments.
"Every day is a 'acceptable' moment, one of grace, for every day we are invited to give ourselves to Jesus, to trust in Him, to abide in Him, to share His lifestyle, to learn true love from Him, to follow Him in doing the will of the Father every day, which is the only great law of life.”
"Every day" we need to seek conversion, Pope Benedict continued, "even when we are faced with difficulties and troubles, in spite of the tiredness and the failures, including when we feel like abandoning the path of following Christ, and when we want to withdraw into ourselves, into our selfishness, without realizing that we need to open ourselves to God’s love in Christ to live the same logic of love and justice.”
The Holy Father also reflected on the meaning of the ashes distributed today. The ashes given on the first day of Lent, he said, serve as an act of renewal "of our commitment to follow Jesus, to let ourselves be transformed in His paschal mystery, to win over evil and do good, to let the 'old man' tied to sin die and let the 'new man' be born transformed in the grace of God."
In closing, Pope Benedict invoked the protection and aid of Our Lady to accompany us in these 40 days of prayer and sincere penance so that we will be purified and "completely renewed" for Easter.
Posted by Padre Steve at 9:30 AM

Every year I see those candles and I ask myself,"why don't the brethren invest in a set of followers!?"