Salesian leader looks to future of Haiti with hope 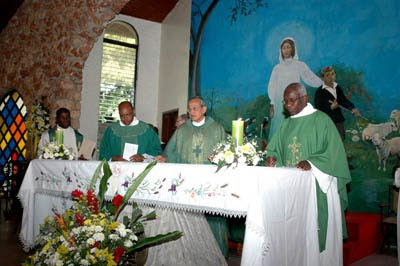 During a visit to Haiti last week, the Superior General of the Salesian Order, Father Pascual Chavez, encouraged Salesian workers and volunteers to bring “hope to the people,” before “thinking about rebuilding" the country.

According to a press release, Fr. Chavez arrived by helicopter to the Haitian capital on February 11 to visit the Salesian homes devastated by the recent earthquake. He also spent time at the school, Ecole Nationale des Arts et Métiers, where he “paused in silence and prayer before the mountain of rubble beneath which the bodies of 150 seminarians still lie.”

In a meeting with young people, Fr. Chavez urged them to “look to the future. Your task now is to give hope to Haiti.” He then visited the Salesian school of Petionville, where Fr. Sylvain Ducange, who was recently named Salesian Superior of Haiti, said in his welcoming address: “As children of Don Bosco, we are characterized by joy, moved by optimism, and we believe in the rebirth of the Haitian people and in the re-founding of the Salesian charism in our country.”

During his tour through the devastated city of Port-au-Prince, Fr. Chavez encouraged Salesians and their volunteers to focus their attention on helping the victims of the earthquake and beginning the reconstruction of schools, homes for children on the street, and formation houses.

Fr. Chavez extended his stay in Haiti to accompany the Salesian community as it recovers from the tragedy.
Posted by Padre Steve at 9:52 AM