The following comes from the Salesian News Service: 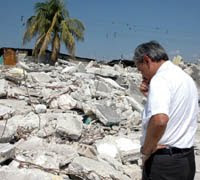 The Rector Major was very moved in recent days as he visited Port-au-Prince. A short video, “Tears for Haiti,” on ANSchannel bears witness to it.

The pictures show his visit to the Salesian center of Ecole Nationale des Arts et Métiers (ENAM). “Here there were two floors. Two floors reduced to nothing!” the Rector Major said in dismay in front of the ruins of one of the blocks which, thanks to a couple of minutes, did not trap another hundred youngsters who had just left it for recess.

Among the rubble that the Italian Civil Defense service is working to remove, Fr. Chavez stopped where there are still bodies buried. “This was another part of the school which had three floors. Look what it is reduced to! Here there are 150 bodies of our pupils, our students, our teachers. They have the right to be afforded dignity for their lives and also for their deaths.”
The streets of Port-au-Prince show just how much damage the earthquake caused. The National Palace, residence of the President of the Republic, collapsed on itself.

Taking a seating on some of the rubble of the Catholic cathedral, Fr. Chavez said: “I pray and hope that this will be an opportunity for the rebirth of the country! Refounding too our Salesian presence and collaborating in the building of a world that can give more hope and a better future to this country. I don’t hide my emotion, I’m upset, … after seeing up close, knowing how many bodies are still under the rubble … I can only be silent!”

The video also shows the reception being provided by the Salesians at Drouillard and, above all, at Carrefour-Thorland. Here, in collaboration with the Salesian Sisters and the Mexican Civil Protection services, over 12,000 homeless people are staying.
The video “Tears for Haiti” is one of the things being done so that, as Fr. Chavez himself says, “the spotlights don’t go out on Haiti!” Shortly there will be a letter from the Rector Major to the Salesians and to the Salesian Family. In the Image Bank photographic archives high-resolution photos are available.

Accompanying the Rector Major on his journey to Haiti between February 13 and 15 were the director of ANS, Fr. Donato Lacedonio, and two of the staff from Missioni Don Bosco Media Center in Turin, Stefano Bianco, executive producer, and Bro. Antonio Saglia, SDB. This decision was based on the desire to communicate information which was more precise, complete, and effective. A DVD is already in preparation with the reports of the Salesians rescued from the ruins and the account of the Rector Major’s visit.
Posted by Padre Steve at 6:03 PM