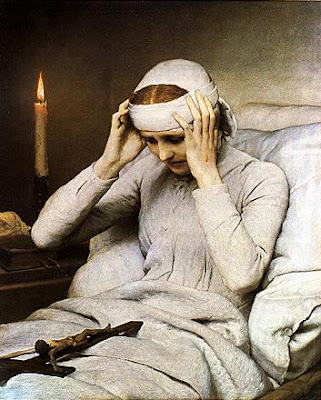 Today we remember Blessed Anne Catherine Emmerich. This great mystic lived only on the Eucharist for the last 12 years of my life. She also spoke of the fact that every city has its own Guardian Angel! We can use all the help we can get! The following comes from the Patron Saints Index:

Born to poor but pious peasants. She was a very pious child who suffered with poor health, but who received visions and prophesies; they were so commmon that she thought all children could see the Child Jesus and the souls in Purgatory. She was able to diagnose illness and recommend cures, and to see a person’s sins.

She worked on her family’s and other area farms, as a seamstress, and as a servant to a poororganist where she studied the instrument. Entered the Augustinian convent at Agnetenberg, Dulmen, Germany in 1802. Though her health was poor, her enthusiasm for the religious life was great, and she either energized her sisters, or put them off badly. Given to going into religious ecstacies in church, her cell, or while working.

The convent was closed by government order in 1812, and Anne moved in with a poor widow. Her health failed, and instead of working as a servant, in 1813 she became a patient. Her visions and prophesies increased, and later that year she received thestigmata with wounds on her hands and feet, her head from the crown of thorns, and crosses on her chest, and the gift of inedia, living off nothing but Holy Communion for the rest of her life. She tried to hide the wounds, but word leaked out, and her vicar-general instituted a lengthy and detailed investigation; it was determined to be genuine.

In 1818 she was relieved of the stigmata. In 1819 the government opened their own investigation. She was imprisoned, threatened, cajoled, and kept under 24-hour-a-day surveillance. The commission found no evidence either way, could not get Anne to change her story, eventually gave up, and failed to publish their findings. When they were forced to report, they declared the incident a fraud, but could not explain why they thought so, or why they had not published their findings.

The poet Klemens Brentano visited Anne. She announced that she had seen Brentano in a vision, and that he was to make a writtenrecord of the revelations that she received. He made notes of the messages, translating from Anne’s Westphalian dialect to commonGerman, getting Anne to confirm his version. In 1833 these were published as The Dolorous Passion of Our Lord Jesus Christ according to the Meditations of Anne Catherine Emmerich. This was followed in 1852 by The Life of The Blessed Virgin Mary, and a three-volume Life of Our Lord from 1858 to 1880. While many such relevatory works deal with spirituality and ideas, these are very much straight-forward narratives and descriptions of events, yet have beent he source of encouragement for many.