A New Cardinal for New York! 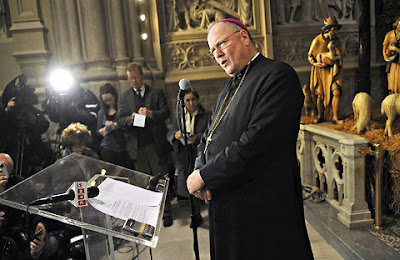 On this “Twelfth Day of Christmas” the traditional celebration of the Epiphany, I have received a gift from Pope Benedict XVI, as he announced just a couple of hours ago at the end of Mass in Saint Peter’s Basilica that I would be among those to become a cardinal in Rome at the consistory of February 18th.

Yes, I am honored, humbled, and grateful, …but, let’s be frank: this is not about Timothy Dolan; this is an honor from the Holy Father to the Archdiocese of New York, and to all our cherished friends and neighbors who call this great community home.

It’s as if Pope Benedict is putting the red hat on top of the Empire State Building, or the Statue of Liberty, or on home plate at Yankee Stadium; or on the spires of Saint Patrick’s Cathedral or any of our other parish churches; this is the successor of Saint Peter saying to the clergy, sisters, brothers, lay faithful of this archdiocese, and to all of our friends and neighbors of New York: Thank you! Keep up the good work! You are a leader, an inspiration, to the Church and to the world.

Over the Christmas holy days I finished a biography of President Kennedy, and recalled his reply to someone who sincerely congratulated him on the honor of the presidency.

“Thanks,” John Kennedy replied, “but I don’t look at it so much as an honor as a call to higher service.”

My sentiments exactly. This is not about privilege, change of colors, hats, new clothes, places of honor, or a different title. Jesus warned us about all that stuff.

No: this is about an affirmation of love from the Pope to a celebrated archdiocese and community, and a summons to its unworthy archbishop to serve Jesus, His Church universal, His vicar on earth, and His people better.

I’ll try to do that…but I sure need your prayers.

Adding to our sense of joy, is the news that another native New Yorker, my brother bishop and good friend, Archbishop Edwin O’Brien, until recently Archbishop of Baltimore and now the Grand Master of the Equestrian Order of the Holy Sepulcher, has also been elevated to the cardinalate. The Cardinal-designate was ordained a priest for this Archdiocese in 1965, and he is still warmly remembered for his service here as a priest, secretary to Cardinals Cooke and O’Connor, Rector of Saint Joseph’s Seminary, and auxiliary bishop.

Thanks so much for your good wishes.
Posted by Padre Steve at 12:05 PM