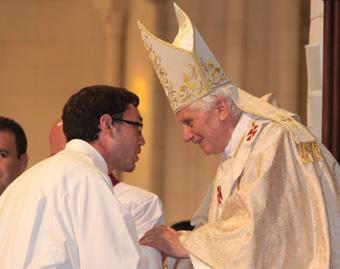 Pope Benedict XVI advised the seminarians of his diocese that it takes “integrity, maturity, asceticism, constancy and heroic fidelity” to be a good seminarian and become a great young priest.

As Bishop of Rome, the Pope addressed the students and staff of the Almo Collegio Capranica, one of the oldest seminaries of Rome, on Jan. 20 in the Vatican’s Clementine Hall.

The seminary is celebrating its 555th anniversary on Jan. 21, the Feast of St. Anges of Rome.

Pope Benedict explained that seminary life must be founded on “a solid spiritual life animated by an intense relationship with God, as individuals and in the community, with a particular care for liturgical celebrations and frequent recourse to the sacraments.”

And once ordained, he added, priestly life “requires an ever-increasing thirst for sanctity, a clear 'sensus Ecclesiae' and an openness to fraternity without exclusion or bias.”

St. Agnes was a young Roman woman who lived between the 3rd and 4th century. She chose to die, rather than surrender her virginity. The Pope pointed to her example as one for the seminarians to follow.

“For St. Agnes martyrdom meant agreeing to spend her young life, generously and freely, completely and without reserve, so that the Gospel could be announced as the truth and beauty which illuminates existence.”

As well as her piety and bravery, the Pope also praised the virginity of St. Agnes as worthy of imitation.

“Her path to the complete gift of self in martyrdom was, in fact, prepared by her informed, free and mature choice of virginity, a testimony of her desire to belong entirely to Christ.”

Pope Benedict also raised a constant them of his pontificate with the seminarians by telling them that they need to develop not only their souls but also their minds.

“Part of a priest’s journey of sanctity,” he proposed, “is his decision to develop, with God’s help, his own intellect, his own commitment: an authentic and solid personal culture which is the fruit of constant and impassioned study.”

Being at the heart of the universal Church, the Pope said, should allow them to “learn to understand the situations of the various countries and Churches of the world,” to ensure that “no culture is a barrier to the word of life, which you must announce even with your lives.”

“The Church expects a lot from young priests in the work of evangelization and new evangelization,” he said, before imparting his apostolic blessing.

“I encourage you in your daily efforts, that rooted in the beauty of authentic tradition and profoundly united to Christ, you may bring him into your communities with truth and joy.”
Posted by Padre Steve at 3:18 PM