Youth a strong presence at DC March for Life 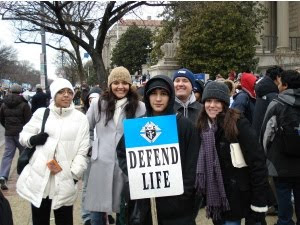 Young people from across America made up a significant amount of the huge crowds that gathered in Washington, D.C. for the annual March for Life.

John Hughes, an 18-year-old student at Seton Hall Preparatory School in New Jersey, told CNA that he supports the event because “to not be pro-life is to be ignorant.”

“Science has shown that life begins in the womb,” he said, arguing that abortion advocates demonstrate a “lack of responsibility” in ignoring the science of fetal development.

Even most U.S. states, Hughes added, recognize an unborn baby as a living child if both mother and baby are killed in a violent crime.

The college student was among the massive crowds of young people who weathered fog and rain in the nation’s capital to attend the annual March for Life on Jan. 23.

The march was held one day after the 39th anniversary of the Supreme Court’s 1973 Roe v. Wade decision that legalized abortion in the United States.

Hughes said that he is “one hundred percent” hopeful about the future of the pro-life movement, given several legislative pro-life efforts on the state level such as abortion restrictions or Planned Parenthood defunding.

She explained that Planned Parenthood and other organizations that support abortion “are not telling women the truth” when they say that an unborn baby is a “blob of cells” and fail to show women that the fetus they carry is “another human being.”

Support for women’s rights does not create the “right to kill an innocent unborn child,” Boyd said. “Women don’t have the right to murder.”

Matt Menendez, age 20, is the president of Harvard right to life. He explained that although the United States is largely pro-life, there are only a small minority of students at Harvard “who are willing to speak up” in defense of life.

“We’re always fighting an uphill battle,” he said. While the work is “very difficult,” it is also “very, very rewarding.”

He said that the group regularly receives calls and emails “from people who say they’re afraid to be prolife.”

Menendez described the group’s work as “fighting an intellectual battle” in the hopes of “opening discourse” on a topic that is considered somewhat “taboo” and is “often ignored” at Harvard.

“It’s really energizing to be part of that movement,” he said.

Luciana Milano, another member of Harvard’s right to life group, attended the march for the first time this year. She explained that attending Harvard strengthened her pro-life views because she was forced to defend her beliefs to those who disagreed with her.

She said that although the experience “has been difficult,” it has made her “a stronger believer” in the dignity of all human life.”

Describing the march as “awesome,” Milano said that she was impressed and overwhelmed by the large number of people attending the event.

“The second that I saw large amounts of people, I almost cried,” she said.
Posted by Padre Steve at 11:17 AM