Cardinal Dolan: "Only those themselves first evangelized can then evangelize" 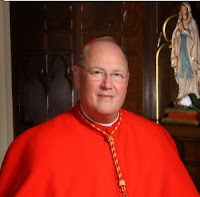 The mission of evangelization, which is critical to the calling of every bishop, must begin with penance and interior renewal, said Cardinal Timothy M. Dolan, president of the U.S. bishops' conference.
"We cannot engage culture unless we let Him first engage us; we cannot dialogue with others unless we first dialogue with Him; we cannot challenge unless we first let Him challenge us," the cardinal told his fellow bishops.

"Only those themselves first evangelized can then evangelize," he stressed, encouraging the U.S. bishops to adopt a "spirit of conversion born of our own interior renewal."

The cardinal delivered his remarks to the Nov. 12--15 fall assembly of the U.S. Conference of Catholic Bishops, which is being held in Baltimore.

He acknowledged numerous "urgent issues" that call for the bishops' "renewed and enthusiastic commitment," including the recent devastation caused by Hurricane Sandy, the call to a New Evangelization and the challenge of engaging the culture on critical topics.

But it is important to keep "first things first," allowing Christ to remain the center of focus in all of the Church's work, Cardinal Dolan emphasized.

Amid the Church's many efforts to serve those who are in need, the task of evangelization remains a constant underlying calling, he explained.

Cardinal Dolan also touched on the current Year of Faith and the recent Synod of Bishops on evangelization.

Both of these events are aimed at "the effective transmission of the faith for the transformation of the world," he said, recalling Pope Benedict’s words that ‘we ourselves are the first to need re-evangelization."

The final message of the synod on the New Evangelization, he noted, acknowledged that the Church's ordained leaders "should never think that the new evangelization does not concern us personally."

"The invitation to evangelize becomes a call to conversion," the synod message said, noting that the bishops "can never really be equal to the Lord's calling and mandate to proclaim His Gospel to the nations."

Therefore, Cardinal Dolan said, the bishops of the United States must be open to being evangelized themselves, realizing that "the Sacrament of Reconciliation evangelizes the evangelizers, as it brings us sacramentally into contact with Jesus, who calls us to conversion of heart."

Unfortunately, the cardinal observed, while the Second Vatican Council called for a renewal of confession, the sacrament declined in the years following the council.

"We became very good in the years following the Council in calling for the reform of structures, systems, institutions and people other than ourselves," he said.

Cardinal Dolan acknowledged that those reforms have played an important and transformative role in the Church, but said it is also important to remember that "in no way can the New Evangelization be reduced to a program, a process, or a call to structural reform," because it is "first and foremost a deeply personal conversion within."

He encouraged his fellow bishops to "make the Year of Faith a time to renew the Sacrament of Penance," through efforts such as the Keep the Light On confession initiative during Advent and reflecting on a return to embracing all Fridays as particular days of penance.

A personal commitment to the sacrament is also crucial to effective transformation, he explained, so that the bishops may offer the "witness of a repentant heart."

"We work at giving our people good examples of humble, repentant pastors, aware of our own personal and corporate sins, constantly responding to the call of Jesus to interior conversion," he said.
Posted by Padre Steve at 4:03 PM