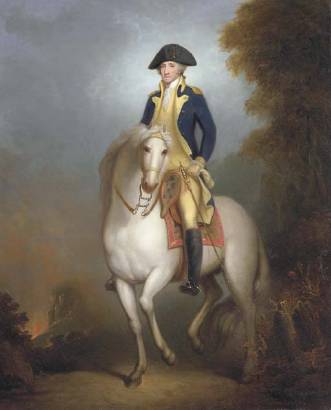 The following is a quote from the back of the book entitled "The Bullet Proof George Washington". I found it at the Marcus Allen Steele blog:

“George Washington’s part in the July 9th, 1755 battle during the French and Indian War is undisputedly one of the most significant events of his early years: his life literally hung in the balance for over two hours. This dramatic event helped shape his character and confirm God’s call on him. “During the two-hour battle the twenty-three year old Colonel Washington had ridden to and fro on the battlefield delivering the General’s orders to other officers and troops. The officers had been a special target of the Indians. Of the eighty-six British and American officers, sixty-three were casualties. Washington was the only officer on horseback not shot down.

“Following the battle Washington wrote a letter to his brother in which he readily and openly acknowledged: ‘By the all powerful dispensations of Providence, I have been protected beyond all human probability or expectation; for I had four bullets through my coat and two horses shot under me, yet I escaped unhurt, although death was leveling my companions on every side of me!’

“Fifteen years later, an old, respected Indian Chief sought out Washington. The Chief, explaining that he had led the Indians against them in the battle fifteen years earlier, revealed to Washington what had occurred behind the scenes: ‘I called to my young men, mark yon tall and daring warrior. Himself is alone exposed. Quick let your aim be certain, and he dies. Our rifles were leveled, rifles but for you, knew not how to miss-–twas all in vain, a power far mightier than we shielded you. Seeing you were under the special guardianship of the Great Spirit, we immediately ceased to fire at you. I come to pay homage to the man who is the particular favorite of Heaven, and who can never die in battle.’”
Posted by Padre Steve at 8:00 AM